Complete or Not Complete?

“And I found a part of his tail,” said Jessie as she placed a puzzle piece into its spot.

“I like doing brand new puzzles. It’s fun!” Justin was excited. He got to go to the store and choose a new puzzle with his very own money. This puzzle was a picture of a giant, roaring T. rex. He looked strong and dangerous!

Justin and Jessie had been working on the new puzzle for a little while when the doorbell rang. Mom answered the door. Justin and Jessie ran to see who it was. Two ladies wanted to talk about God. But to Justin’s surprise, Mom said, “No, thank you.” The ladies left, and Mom closed the door.

“How come you didn’t want to talk to them, Mom?” asked Justin.

“Yeah, they were talking about God, weren’t they?” asked Jessie.

“Well, yes and no,” Mom replied. “You see, they were not talking about the same God we believe in. They wanted to tell me about a false god.”

“False means something that’s not true. So a false god is not the one true God of the Bible. They were false teachers. They wanted to tell me their own ideas about who God is.”

“But it looked like they were carrying Bibles,” Justin pointed out.

“Yes, they were. But those books were not God’s complete Word.” Mom went into the family room and sat down.

“What do you mean by God’s complete Word? I don’t get it.”

“You see, complete means something that is finished—it’s just the way it should be. Take your puzzle over there. Is it finished?” asked Mom. 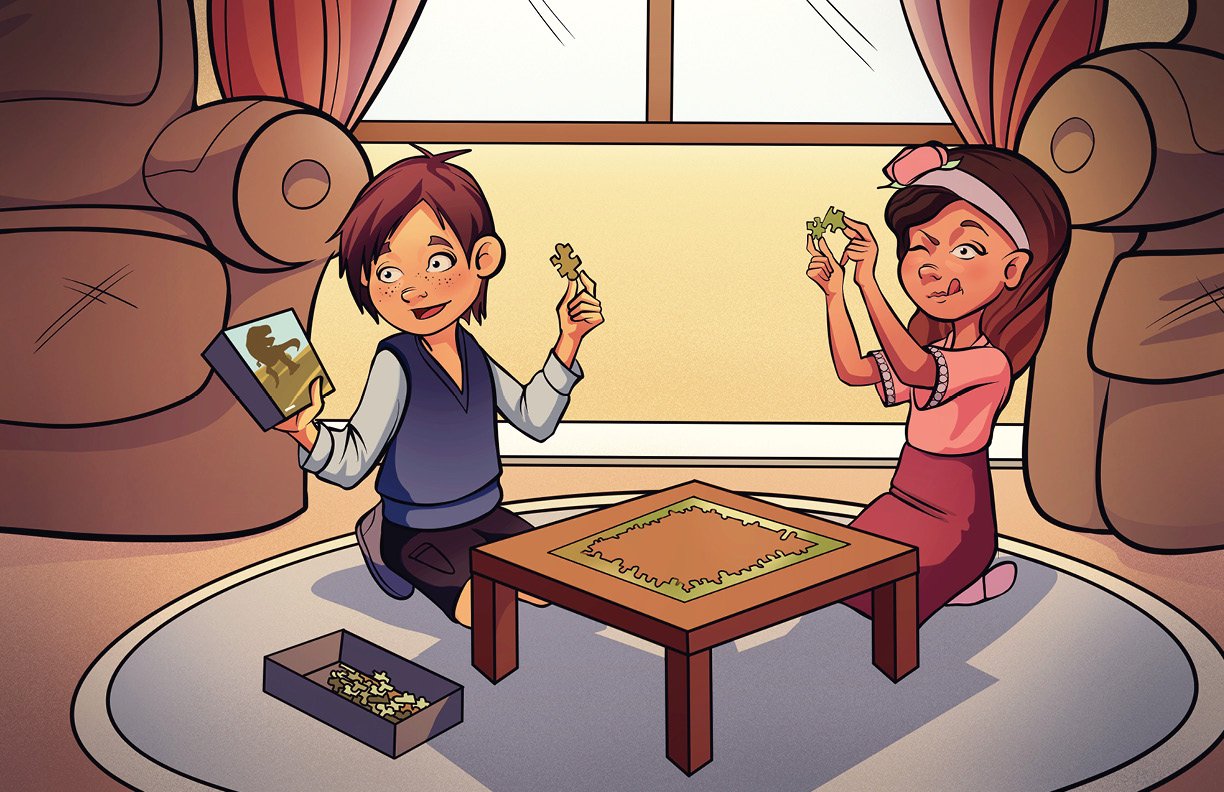 “No way! We just started on it. There are still pieces missing.”

“Right. So that means it’s not complete since there are pieces missing. And that’s how it is with some people who believe false ideas about God. They have changed God’s Word and taken things out of it.”

“Yes, please!” said the kids. They went into the kitchen and sat down at the table. Mom cut some apple slices and poured some juice for them then left the kitchen.

“We need to eat fast,” said Justin, “so we can finish the puzzle before you go home.”

“You mean so we can complete your puzzle?” corrected Jessie. She grinned at Justin.

“Yes, so we can complete the puzzle,” Justin replied in a grown-up voice, and grinned back at her.

When the kids came back to the family room, they sat down at the little table to finish working on the puzzle. But there in the middle of the puzzle where the T. rex was supposed to be were three puzzle pieces that had flowers on them!

“What?!” Justin shouted in surprise. “How did those get there?”

Just then, Mom walked in and asked, “Do you like it? I completed your puzzle for you.”

“Huh? That won’t work!” cried Justin. “They don’t even fit together right.”

“Yeah, they don’t belong in this puzzle,” agreed Jessie.

“No, Mom. They don’t fit right. This puzzle is a T. rex puzzle, not a flower puzzle. It’s all wrong,” explained Justin.

Mom smiled and nodded, “You’re exactly right.” She sat down at the table with the kids. “These pieces don’t belong here, do they?”

“No, they don’t. Let’s take them out,” said Justin. “Here’s a good piece. You can put this one in instead.” Justin handed a puzzle piece to his mom.

“So, Aunt Kristy,” asked Jessie, “is that what some people do to the Bible? Do they put things in that don’t belong there?”

“Yes, Jessie. Many people do not love God and His Word like we do. They try to take things away from it or put in new parts that don’t belong. But God already finished His Word.”

“Exactly,” Mom replied. “God’s Word is already the way He wants it. So if we take words out of it or try to fit other ideas into it, then it’s not right.”

“I see,” said Jessie. “So we can’t take things out or put new stuff into the Bible.”

“There! Ta-da!” Justin pressed the last piece into his puzzle. “Now it’s complete.”

“And it has all the right pieces,” said Jessie.

“Well, I’ll just put these extra ones back where they belong in the flower puzzle.” Mom gently tossed the extras into the other puzzle box.

“Yay! Now I can show my brand new, complete puzzle to Dad when he comes home!” 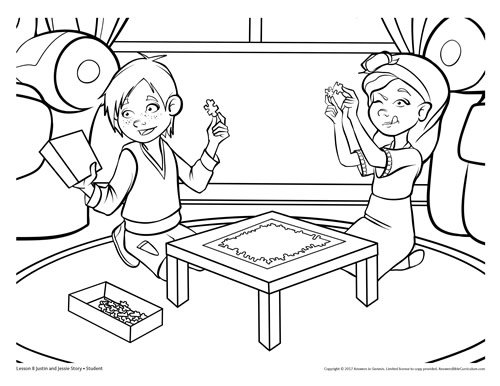