“Hi, Matt. You ready to go?” asked Justin as he opened the door to let his neighbor Matt in.

“What about your brother and your mom? Aren’t they coming?”

It was four days before Christmas and time for the school play. Everyone in Justin’s class had a part in retelling the birth of Jesus.

When they got to the school, Justin went to his classroom while his family and Matt headed to the auditorium where the play would be up on the stage.

“There you are, Justin.” His best friend, Jessie, met him at the door of the classroom. She was wearing her angel costume with white sparkles on it. “Mrs. Bentley wants you to come and get your costume on right away.”

Soon the classroom was full of angels, shepherds, and wise men, milling around waiting for their moment to go onstage.

Mrs. Bentley stood at the door. “Everyone line up in order now just the way we practiced,” she directed. “Remember to say your lines nice and loud so everyone can hear.”

The play began. Michael’s dad was the narrator. As he read about the first Christmas from the Bible, a boy and a girl from Justin’s class pretended to be Joseph and Mary traveling to Bethlehem.

“Okay, shepherds and angels, it’s your turn,” whispered Mrs. Bentley from backstage. Two kids in sheep costumes moved out onto the stage saying, “Baa! Baa!” Then the shepherds came out and sat down beside them. Michael’s dad read how the angel told the shepherds about the baby Jesus who was born that night.

Jessie walked forward in her angel costume and said, “Fear not! For behold, I bring you . . . umm . . . . ” Jessie couldn’t believe she forgot the next words. She looked around for Mrs. Bentley, but didn’t see her anywhere. She glanced at the kids playing the sheep, but they just looked at her and said, “Baa! Baa!”

Jessie was on her own. She stood very still and thought hard for a minute. Then it came to her, and all in one big breath she blurted out, “Oh yeah! I bring you good news of great joy that will be for all the people. For unto you is born this day in the city of David a Savior, who is Christ the Lord.” She let out a big sigh of relief—phew! The audience chuckled, but Jessie was just glad she finally remembered her part.

Soon it was Justin’s turn to step onto the stage. He was a wise man who wore a long robe with a gold belt. On his head, he wore a tall hat with a feather on it. Justin was nervous. He didn’t have to say anything, but the hat was so big, it kept bobbing around on his head. He was afraid it would fall right off when he bowed down to worship Jesus.

Justin carefully walked out on the stage. Whoops! His hat bobbed back and forth. He stood next to the other wise men. They all got down on their knees—wobble, wobble went the hat. Then he leaned forward to bow. Uh oh! Justin could feel his hat sliding forward then plunk! The hat fell off his head and rolled across the stage.

The angels backstage giggled. Justin could hear Matt hooting with laughter out in the audience. This was terrible! It wasn’t supposed to be funny. Justin felt awful.

After the play was over, the audience clapped as the students lined up to take their bows. Justin held onto his hat this time. He didn’t want it to fall off his head again.

Soon Justin was back in the van heading home with his family. “That was hilarious, Justin!” Matt exclaimed. “Your hat was so funny! It was great.”

Ellie clapped and said, “Jussin has a funny hat!”

Justin frowned. “It wasn’t supposed to happen like that. It wasn’t funny when Jesus was born.”

“Maybe not. But I know I won’t forget about it for a long time,” Matt snickered.

Justin’s dad dropped Matt off at his house then drove the van across the street into their garage.

“Well, it’s getting late. You kids should get ready for bed,” Mom said. “Oh, and Justin, don’t feel bad about tonight. Things like that happen all the time. You still did a great job, and I’m proud of you.”

“Thanks, Mom,” Justin replied. “I sure wish I could forget about it.”

The next day was Christmas vacation, so there was no school. Justin’s family was gathered around the breakfast table when they heard the doorbell ring—ding-dong!

“Who could that be?” Dad wondered as he went to answer the door.

A few moments later, Matt walked into the kitchen with his mom.

“Well hello!” said Justin’s mom. “Would you like some hot cocoa?”

Matt’s mom sat down beside him. “I’m sorry to disturb you,” she began, “but Matt had such a good time at the play last night. He couldn’t stop talking about it, and he kept laughing at something about a hat. Well, I just had to find out what in the world he was talking about.”

Justin looked up in surprise. “Do you want us to tell you about it?” he asked.

“Well, first God had to send an angel to Joseph and Mary,” Justin began. He went on to tell all about the angels and the shepherds and the wise men. “And that’s what happened, except I don’t think the real wise man’s hat fell off.”

“Wow! I didn’t realize there was so much to the Christmas story,” said Matt’s mom.

“Jesus’ birth brought hope and joy not only to the shepherds and wise men but also to us today!” explained Justin’s dad. “You see, Jesus is the Son of God. And God loved the world so much that he sent his Son to die on the cross for sinners, which means all of us. But because Jesus rose again, we can have the hope of salvation and the joy of knowing him.”

“Hmm. I guess I never heard it told like that before.”

“Well, we certainly are happy to share more with you any time. And you’re welcome to join us at church, too,” Justin’s mom added.

“Thank you, I’ll think about it,” Matt’s mom replied. “But for now, Matt and I have to get ready to drive to his grandparents’ house today.”

“See ya, Justin!” said Matt as he and his mom headed out the door.

After they left, Dad said, “How about that, Justin? Your hat troubles turned out to be a good thing! Matt won’t forget about what he heard for a long time, and even his mom wanted to know more.”

“Yeah. I guess I didn’t need to feel bad about my goofy hat. God used it to bring Matt’s mom over today. God sure is good at working things out.”

“He sure is!” his parents agreed. 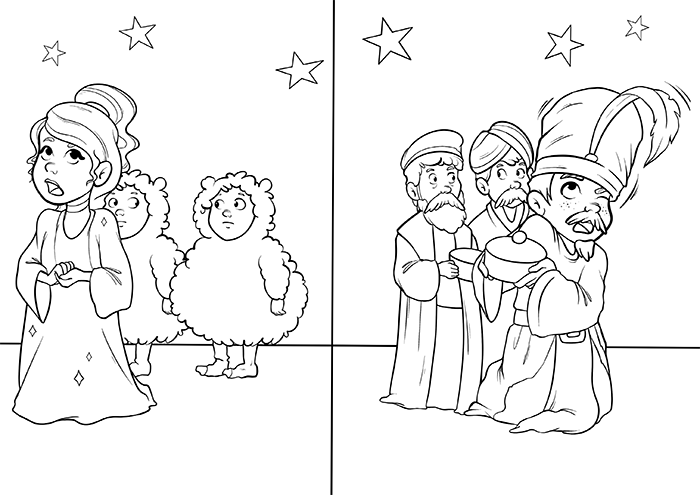