“Okay, here’s what we’ll do,” Jeremy instructed. “Since our dads are guarding the treasure, we’ll need to get them to look the other way while Emily runs up to the porch to get it. Jessie, you make your dad run that way, then Justin and I will make sure our dads don’t see Emily.”

The plans were made. The kids’ team was ready. They peeked out from behind the bushes at their three dads standing guard by the back porch.

“Shhh!” Jessie put her finger to her mouth, then pointed to her dad. “He’s right there,” she whispered to her cousin, Emily.

Emily grinned and nodded. They tiptoed a few more steps until they were near him. Then Jessie and Emily opened fire with their water guns. “We got you, Daddy!” Jessie shouted.

Her dad spun around and raised his large water blaster.

“Oh no!” Jessie screamed and darted behind a bush just as the shot of water whizzed past her face.

Emily laughed as Jessie and her dad tried to squirt each other with their water guns. Emily forgot that she was supposed to run for the treasure—until she got a mouthful of water. “Ahh!” she squealed frantically and dove behind the bush with Jessie.

“Hmm,” said Jessie’s dad as he pretended not to know where the girls were hiding. “Where did those secret spies go?”

The cousins pressed their hands over their mouths to keep the giggles inside as they watched Jessie’s dad look behind a tree.

“That was close,” Emily breathed hard as she watched her uncle move away from them.

“There you are,” said Justin as he skidded to a stop and knelt down by the girls.

“Oh, Justin, you scared me,” said Jessie. “We almost got soaked.”

Just then, Jeremy crawled up behind them. “How come you didn’t get the treasure, Emily?”

“I’m sorry. I forgot I was supposed to. Then I got blasted with a water gun and ran over here,” Emily explained. “I don’t think it’s going to work this way.”

“How about if we send a spy to sneak around behind them?” Justin suggested.

“That might work. There’s a small space on the other side of the porch where Emily could sneak in and crawl up to the treasure.”

“We’ll go behind the trees to make our dads come after us, so Emily doesn’t get caught,” added Jessie.

The kids whispered their plan to each other, then quietly crawled from their hiding place.

“Ready? Go!” shouted Justin as he took off.

Jeremy and Jessie bolted toward the trees, shouting, “Over here! Come get us!”

“There they are!” said Jeremy’s dad to the others. All three dads sprinted toward the trees.

“I see you, Jessie!” her dad shouted and pulled the trigger on his water blaster. Bloosh! A huge burst of water slammed against the tree and sprayed Jessie’s face.

“Oh, yeah? How about this?” Jessie shouted as she quickly stepped out from behind the tree and doused her dad.

“Hey! Now I’m going to have to change clothes,” he pretended to whine, which made Jessie laugh.

Justin, Jeremy, and their dads were running in and out from behind trees and bushes, pumping their squirt guns as fast as they could, trying their hardest to blast each other.

Meanwhile, Emily darted behind the bushes close to the porch. She peeked out. “Looks clear,” she thought. Suddenly she heard a strange noise: squish-squash, squish-squash. Emily ducked back as her dad walked by. He was soaked from his hair to his saggy shirt and shorts, all the way down to his soggy socks and squishy shoes. Emily almost laughed out loud but slapped her hand over her mouth before it was too late.

Emily crept back the way she came, being as quiet as possible. Suddenly she felt cold water splatter across her neck. “Ahhh!” she yelled and dove behind a tree.

“Oh no! Justin, help!” she cried out as she hurriedly shot her water gun.

Justin pumped up his water gun as he sprinted across the yard to help Emily. “Hey! Not fair,” laughed Emily’s dad and shot water back at Justin.

Emily ran as fast as she could through the mushy grass, but her feet slipped out from under her and she hit the squishy ground—splat!

When Emily looked up, she saw Justin’s dad racing toward her. “Oh, no!” she thought. “I’ve got to hide!” She scrambled toward the porch. Breathing hard, she ducked down expecting to be doused with water at any moment.

Then she heard Jessie shouting, “Emily, go now!” Emily looked out from her hiding spot. “Now’s my chance!” she said to herself as she ran quickly to the back of the porch and crawled through the secret space. There it was—the treasure box full of her mom’s freshly baked cookies.

She dashed toward the box and snatched it up. “I got it!” She cried out and held the box up high.

“Hurray!” shouted the others as they all collapsed on the soggy grass.

Emily brought the box of cookies and sat down by her dad. He looked at her with a sad face, hoping she would share the cookies.

Emily smiled. “Here you go,” she said, as she held the box out to him.

“Thanks, Emily,” he said happily. “Yay for the secret spy!” 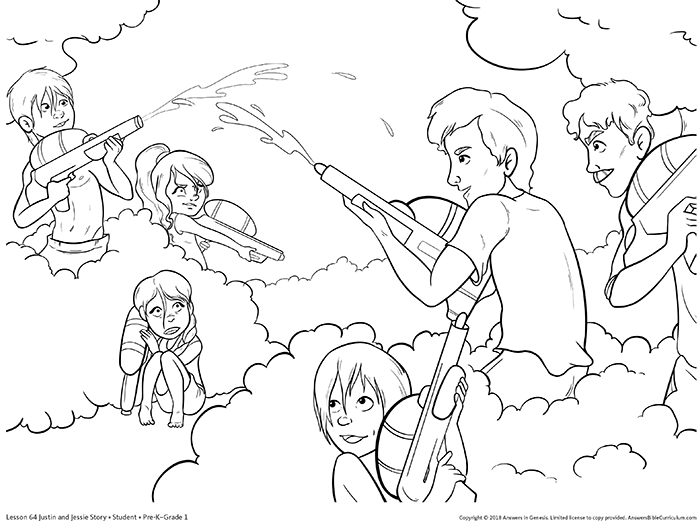