An early modern human’s skull that apparently washed into a Laotian limestone cave long ago has anthropologists rethinking the wheres, whens, and hows of early human migration. Some evolutionary anthropologists believe the reconstructed cranium represents the oldest documented early modern human presence in mainland Southeast Asia. Others raise concerns about the accuracy of the dating. 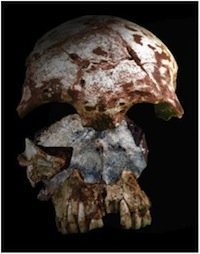 This reconstruction of the skull from Tam Pa Ling cave lacks the brow ridges and large teeth commonly seen on skulls of extinct humans, like Neanderthals. Attempts are now being made to extract DNA. Some anthropologists consider this discovery a game-changer in their understanding of early human migration while others are skeptical of its age and significance. Image by the study’s lead author Fabrice Demeter at www.livescience.com

The skull fragments were found deep within the Cave of Monkeys (aka Tam Pa Ling cave) high in the mountains of Laos. (The cave is named for monkeys that frequent nearby papaya and banana trees, not for any evolutionary reason.) No artifacts or signs of human occupation have been found, and the sediment in the cave appears to have been washed in, resulting in a topsy-turvy mixture of dates for the material surrounding the skull.

The researchers, writing in Proceedings of the National Academy of Sciences, report the skull was washed in and covered by over two meters of sediment long ago. They have narrowed their range of possible dates for the skull by radiocarbon and optical luminescence dating1 of the sediment as well as uranium series dating of the frontal bone. By combining information from multiple methods, the researchers propose the skull is at least 46,000 to 51,000 years old but no more than 63,000 years old.

This discovery, according to the study’s authors, helps resolve the “paleontological gap in the Late Pleistocene of Southeast Asia”2 by demonstrating that early modern humans must have dispersed from Africa through multiple routes simultaneously. It shows early modern humans were in Asia along with those viewed by evolutionary anthropologists as less evolved “archaic” people, like the Red Deer Cave people recently discovered in China.

The skull from Laos (TPL-1, named for the Tam Pa Ling cave) has small teeth like modern humans, lacks brow ridges and other Neanderthal features, and is nearly identical to skulls of other early modern humans. Chris Stringer of London’s Natural History Museum agrees that TPL-1 predates other Homo sapiens discovered in Asia by 20,000 years.3

On the other hand, Darren Curnoe, co-discoverer of the unusual looking humans at China’s Red Deer Cave, questions the dates assigned to this skull. Curnoe points out that the sediment in the cave has been severely disturbed, washed out, and replaced. He writes,

And though the researchers indicate the sand grain dates “should provide a result close to the ‘true’ burial age,” Curnoe points out,

The skull is dated directly, using a different method, to about 63,000 years old, but with large errors. Dates using the radiocarbon method are also out of order (inverted), suggesting the soils have been disturbed once they were formed.5

Notwithstanding, the researchers believe their discovery of “Late Pleistocene human remains” offers a more reliable proof of early modern human presence in the region than “molecular clocks of unknown precision applied to extant [living] human genetic data”6 and anthropological dating methods that “inappropriately equate technology with human biology.”7 They agree with conventional evolutionary anthropologists that anatomically modern humans evolved in Africa 150,000 to 200,000 years ago and dispersed, but they believe their discovery demonstrates that the dispersal was farther, faster, and more complex than previously suspected.

“The typical thinking [regarding migration routes into Asia] was that once modern humans hugged the coastline to go from India to Southeast Asia, they went southward into Indonesia and Australasia (the region comprising Australia, New Zealand and neighboring Pacific islands),” coauthor Laura Shackelford explains. “We think they absolutely did that, but we're also suggesting other populations probably went north or northeast toward China, and some went through the mountains into mainland Southeast Asia, taking advantage of river systems. Beforehand, no one thought they would have gone into the mountains of Laos, Vietnam and Thailand.”

The evolutionary interpreters of the data surrounding TPL-1 and other ancient people see potential flaws in the assumptions used to date the skull, yet they fail to acknowledge the unverifiable assumptions underlying long-age interpretations of radiometric data in general.8Evolutionary anthropologists with a prior conviction that humans evolved from ape-like ancestors point to additional unverifiable untestable assumptions for support.9

God provided in the Bible His own account of how He created man in His own image, distinct from animals, without evolution, about 6,000 years ago. Furthermore, biblical history documents the eventual post-Flood dispersal of human beings from the Tower of Babel. All the varieties of human beings we find in the fossil record are descended from those people. Several varieties of people evidently became extinct by the end of the Ice Age, but there is no reason to believe that any of these people were lower on the evolutionary scale than each other or modern people, since we are all descended from Noah’s family.