Want to be a better witness? Bodie Hodge, AiG–U.S., shows you how to help others see the authority they rely upon and then to lead them to the gospel message.

Why the Need for This Test?

There are many Christians who say they believe in biblical authority. They may even claim to adhere to biblical inerrancy and say they take the Bible “literally,” or as it is written. However, in practice, many of these Christians often ignore the Bible.

The primary reason many Christians do not adhere to biblical authority in practice is that they are influenced by the religion of humanism—and may not even realize it. Humanism is the common religion of the times. As Christians, we need to be able to effectively recognize and refute it. In this article I will present the “authority test” to help Christians recognize when humanism is trying to overstep the authority of God. But before I explain what I mean by “the authority test,” let’s look at the influence of humanism.

In today’s culture, the religion of humanism has infiltrated the thinking of Christians, whether laity, pastors, elders, or professors. Humanism is a religion that essentially places humans on top and everything else below. So, in this religion, God would be lower than man—or there is really no God at all. 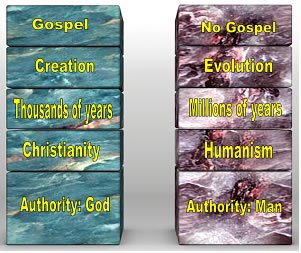 Humanism really began taking hold in the western world with the widespread rejection of God as the authority beginning about 200 or so years ago. Humanism has become the staple religion in universities and state schools around the world and is directly opposed to biblical authority.

Some famous humanists are Dr. Eugenie Scott, who heads up the National Center for Science Education, and Dr. Richard Dawkins, who openly professes atheism and writes books that attack Christianity. Both were signers of the Humanist Manifesto III. However, many people think humanisticly (having man as the authority), whether they realize there is a Humanist Manifesto or not. With humanism being the prime religion taught in today’s schools, it is no surprise that younger generations think as though mankind is the authority.

God Is the Authority

Contrary to what the world believes, we know that God, being the Creator and Sustainer of all things, is the ultimate authority in all things. Consider God’s Word:

All Scripture is given by inspiration of God, and is profitable for doctrine, for reproof, for correction, for instruction in righteousness, that the man of God may be complete, thoroughly equipped for every good work. I charge you therefore before God and the Lord Jesus Christ, who will judge the living and the dead at His appearing and His kingdom: Preach the word! Be ready in season and out of season. Convince, rebuke, exhort, with all longsuffering and teaching. For the time will come when they will not endure sound doctrine, but according to their own desires, because they have itching ears, they will heap up for themselves teachers; and they will turn their ears away from the truth, and be turned aside to fables. But you be watchful in all things, endure afflictions, do the work of an evangelist, fulfill your ministry. (2 Timothy 3:16–4:5) 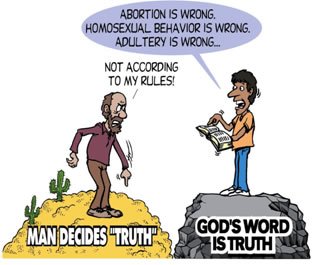 God determines what is right or wrong. Therefore, His Word, i.e., Scripture, is useful for rebuking and correcting. Even people, families, and governing authorities for various cultures can get laws and rules for civil life correct from time to time, but this is because they are borrowing from what God has determined as right and wrong.

The context surrounding 2 Timothy 3:16 reveals that there is a time when people will no longer adhere to sound doctrine from God but will leave the concepts of right and wrong up to their own desires. When one raises up his own desires to be the authority, this is humanism, where humans think they can sit in authority over God. Paul writing to Timothy here says that this philosophy will influence teachers and turn people away from the truth to fables. In today’s culture, this is exactly what is happening with universities and schools and why Christians need to be exceptionally discerning lest they be led astray to fables by humanism (e.g., molecules-to-man evolution) instead of resting on Scripture. 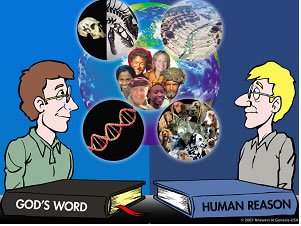 1 Thessalonians 5:21–22 says that we must “Test all things; hold fast to that which is good.” God helps us think through the issues, using the standards of Scripture, to determine what is good and right. Then we should hold fast to that.

This authority test can be used two ways:

There are quite a number of examples in Scripture where God’s authority was reduced and man’s ideas were raised up to be greater than what God said. Here are a few of the many biblical examples that illustrate this:

Putting Ideas and Comments to the Test in Today’s Culture

Christians should learn from these types of examples, because once one reduces God as the authority, then man’s ideas, by default, become the authority. Sadly, many Christians fail to realize that when this happens, the authority is transferred over to man’s erroneous ideas and philosophies and no longer comes from Christ for some. Consider:

As Christians, we need to be able to discern if the ideas of men (even our own) are sitting in a position of authority over God’s Word. Here are three examples:

Consider these comments and try to spot the humanism in these:

With [a], the writer of this statement appeals to the pastor, who appeals to the specific local church, which appeals to man’s ideas about millions of years and evolution. There can be multiple levels to search through before you spot the humanism at the root. With [b], again the person appeals to “science,” but really they mean a secular interpretation of scientific facts. We must use our God-given mind to reach logical conclusions, but if our minds interpret facts in such a way that our conclusion contradicts God’s Word, then we must reject that conclusion and give God the benefit of the doubt. Otherwise, we are guilty of humanistic thinking. We must allow God’s Word to be the ultimate authority.

My prayer is that each one of us will use the authority test on a daily basis to correct our thinking. This is one of the first steps to get back to biblical authority.

It is important to realize that when man tries to sit in authority over the Word of God, then man is trying to judge God. But God makes it clear that it is He and His Word that will judge us.

Once Christians begin to get themselves back to biblical authority, then the next challenge is humanism in the culture. Consider these comments that are common in today’s society and try to spot the humanism in these:

In [a], the paper from the journal is given authority over the Bible’s statement that on Day 6, God created both man and land animals (dinosaurs). Where did the paper come from? Fallible man. In [b], it appeals to multiple humans (scientists) as an authority over God and implies consensus is the method by which we determine truth—but how often has that consensus changed? The consensus in Noah’s day was that there would be no Flood! In [c], the person is sitting in authority over God’s Word claiming there are contradictions (which there aren’t), and, in effect, that God is lying or can’t get His facts straight in what He claims is His Word, true, perfect and complete (Revelation 22:18, 19; 2 Timothy 3:15,16; 2 Timothy 2:15; Romans 3:2; Romans 2:16; Hebrews 4:12, etc.).

Following up the Test in Practice

The authority test simply allows you to recognize the root of a belief system—either going back to God or going back to humanity. But what is the next step? The goals are threefold:

Many people who think humanisticly simply don’t realize it. So, the first goal is to reveal this to them. Perhaps challenge a humanistic worldview (in kindness) by asking questions about how they view the world and how their beliefs relate to things in reality. This is usually a non-threatening way to get people to think about their beliefs (Christian or not) more deeply because they probably haven’t—especially the foundation for their belief system.

This also reveals problems with the foundation of humanism. For example, ask that person why people wear clothes in general. The person may be a bit taken aback, but what this shows is that a humanistic view of the past really doesn’t explain the world. Ultimately, of course, clothing is a Christian aspect that goes back to sin, shame, and sacrifice in Genesis 3.

A few questions like these should get the person thinking—without being “preachy.” What will likely happen, though, is that a person will reveal what they really believe about origins . . . which is probably a mixture of some big bang, long ages, and evolution with some spirituality—or even some Christianity—mixed in.

When some of that comes out, point out the areas in which they are thinking as a humanist (evolution, naturalism, long ages, big bang, etc. are subsets of humanism). You may even have to explain it. Once they realize how humanism has influenced them, then proceed to point out that humans (or even that person individually) are really raising themselves up to be “a god” by placing themselves as the ultimate authority. Point out that humanism is really a polytheistic religion where each human is his own “god.” 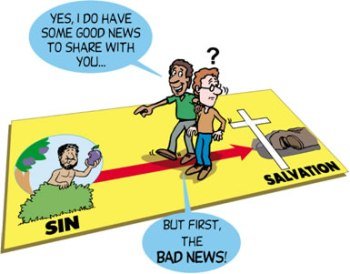 This should get through any humanist thinking, but then suggest to them that the Bible does explain things like the origin of matter, space, time, stars, marriage, clothing, truth, and so on. Then go into the doctrine of sin and that a perfect God originally created everything perfect. It was due to man’s sin that the world is like this—full of death and suffering. Then this can lead into the gospel, and how Christ came to save us from sin and death.

While witnessing, remember to be kind and patient (1 Peter 3:15; 2 Timothy 2:24). After all, we were each enemies of the gospel ourselves at one point (Colossians 1:21)—but Jesus Christ was patient with us and performed the ultimate act of kindness on the cross.