Secrets of the Messel Pit, a Fossil Graveyard

The Messel Pit preserves animals suddenly and catastrophically buried in the wake of the global Flood.

The travel section of the January issue of Smithsonian Magazine features a fine photo gallery of specimens from Germany’s famous fossil graveyard, the Messel Pit. The photos are accompanied by an ode of gratitude proclaiming the “debt humans owe to animals that died out 48 million years ago.” And what is it exactly that we are supposed to be grateful for, according to the Smithsonian’s writer? For the “evolutionary secrets” preserved in this fossil graveyard.

By contrast, we rounded out our News to Know year on the 31st with our own photo-essay “Life Lessons Illustrated in the Animal Kingdom” recalling many of 2013’s favorite animal stories. We reviewed what evolutionary biologists claimed about them and what they could teach us about God’s wonderful designs. Thus it seems fitting now to take a look into the Messel Pit to see what evolutionary secrets it is supposed to reveal, what some of the marvelous animals there can show us, and what we should see as we peer into the pit through “biblical glasses”—in other words, how God’s Word can help us understand what we see. 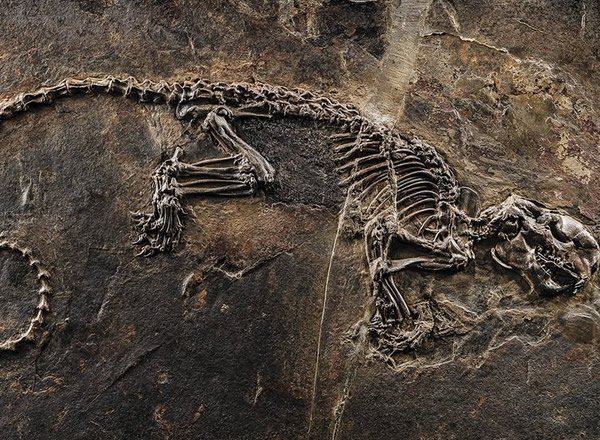 This three-foot-long rodent (Ailuravus macrurus) from the Messel Pit looks like a squirrel. Evolutionists believe it convergently evolved the same features as a squirrel but consider it outside the squirrel lineage. Image by Berthold Steinhilber, via Smithsonian.1 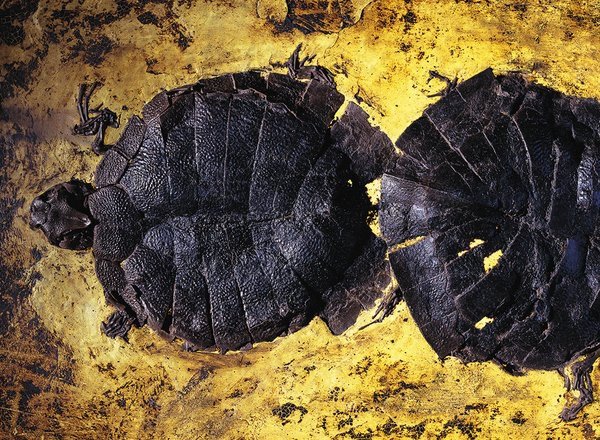 Like other turtles fossilized in the Messel Pit, this pair of turtles resembles modern turtles. Also like other turtles in the fossil graveyard, they appear to have been suddenly buried while in the process of reproducing after their kind. Image by Jonathan Blair Corbis, via Smithsonian.2 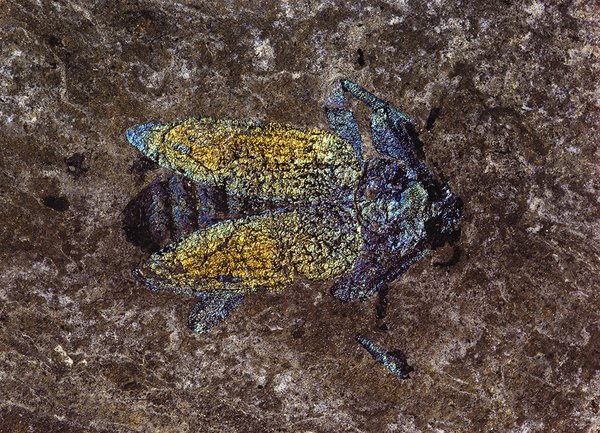 The vibrant colors of this stag beetle fossil from the Messel Pit are still visible, its preservation likely associated with a sudden burial. Image by Berthold Steinhilber, via Smithsonian.3 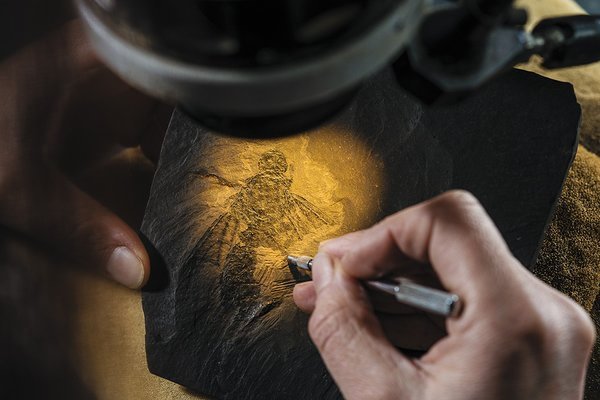 This species of ant, Titanomyrma giganteum, from the Messel Pit fossil graveyard was as big as a hummingbird. Read more about such megafauna in “Why Were Ice Age Animals So Big?” Image by Berthold Steinhilber, via Smithsonian.4 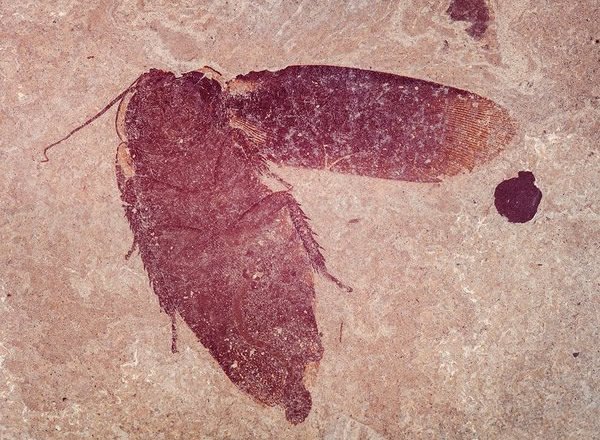 This cockroach grew about two inches long. A wide variety of insects is well-preserved in the Messel Pit, though cockroaches are among the less common ones. Image by Berthold Steinhilber, via Smithsonian.5

The Messel Pit in central Germany is a 200-foot-deep gouge through a forest. Located at an old strip mine from which oil shale (shale impregnated with oil) was once mined, the big ditch almost became a garbage dump, but paleontologists lobbied for its preservation and since 1995 it has been a protected UNESCO World Heritage site. The Messel Pit is a fossil graveyard in which a wide variety of animals and plants are exquisitely preserved. Classified as Eocene rock, evolutionists believe the fossils there are the remains of animals buried around 48 million years ago and thus provide insight into the progress of mammalian evolution following dinosaur extinction.

Evolutionists believe that mammalian evolution started at the same time as dinosaur evolution but only took off with great success when dinosaurs became extinct and vacated many ecological niches. This is how they explain the appearance of a wide variety of mammals in the fossil record in the layers above those containing dinosaurs. Such is the case with the Messel Pit. Because they think the animals in the pit—believed to have once been a deep, steep-sided lake—died during this mammalian heyday, they believe the fossils in the Messel Pit reveal the secrets of mammalian evolutionary success.

Why are so many animals—45 mammalian species as well as reptiles, fish, insects, 43 species of birds, and a few amphibians—preserved in Messel Pit? Many of the animals are preserved intact with fur, colored feathers, or dinner in their stomachs, and nine pairs of turtles are preserved mating. How did their very activities get frozen in time? What caused so many animals to suddenly die? Evolutionary paleontologists propose that toxins or carbon dioxide bubbled up through the lake and ended their lives. The lack-of-oxygen hypothesis is called into question, however, by the presence in the Messel Pit of water-beetle larvae that can only survive in highly oxygenated water.6 For that matter, even the idea that the Messel Pit was a lake is questionable given the relative scarcity of mosquitoes and other water-dependent insects, the rarity of amphibians among the fossils (only one salamander and three species of toads or frogs), and the absence of fossil tadpoles.7

In any case, according to evolutionists, something killed animals visiting a deep lake quite suddenly, they fell in and sank, and then over centuries each was gradually covered by fine clay—with 250 years required to form each inch of sediment—and eventually fossilized. And why didn’t these dead animals simply decompose or get scavenged on the lake bottom? Evolutionists propose that there wasn’t much oxygen at the deep lake’s bottom and that there was therefore shortage of scavengers and bacteria down there.

Moderns And Megas But No Transitions

Some of the animals in the Messel Pit are extinct, and others are pretty much like those we have today. Some, like pygmy horses, are small species of familiar animal kinds. Others are examples of now-extinct gigantic species—megafauna—such as a giant cockroach and a giant ant. There is an extinct three-foot-long squirrel-like mammal called Ailuravus macrurus—hailed by evolutionists as an example of convergent evolution because it looks like a big squirrel but doesn’t fit into the evolutionary lineage proposed for squirrel. (You can learn more about megafauna in “Why Were Ice Age Animals So Big?”) There are also modern-appearing hedgehogs and mice, frogs and turtles in Messel Pit. There are bats with the same impressive specializations as today’s bats. And there is “Ida,” a controversial furry lemur-like primate that some evolutionists claim is a missing link in human evolutionary history. Nothing about this lemur-like primate, of course, indicates it was anything but an extinct lemur-like creature. (You can read more about Ida at “Ida (Darwinius masillae): the Missing Link at Last?”)

As we have explained many times, sharing a few similarities with other organisms does not demonstrate an animal is a transitional form. Common designs and similarities can never demonstrate evolutionary relationships. While evolutionary paleontologists sort through the Messel Pit labeling many extinct and modern-appearing organisms, large and small, what they actually have found is that some animals are highly developed just like their modern counterparts and others are highly developed but extinct. Those findings do not demonstrate anything evolving into anything.

Evolutionary paleontologist Ken Rose comments, “Everyone in vertebrate paleontology knows Messel. There’s really no place in the world that compares. A great deal of what we know from that time period is from there.” But what time does it tell us about? Given that the animals in it are so wonderfully preserved, we must attribute their preservation to a sudden catastrophic burial.

Given that the animals in it are so wonderfully preserved, we must attribute their preservation to a sudden catastrophic burial.

The Messel Pit is a fossil graveyard. The exquisite preservation of the animals in the Messel Pit is consistent with rapid catastrophic burial, not centuries of gradual burial allowing for distortion and decomposition. The global Flood of Noah’s day, around 4,300 years ago, is recorded in biblical history in the book of Genesis (chapters 6–9), confirmed by Jesus Christ Himself in Matthew 24:38–39, and attested to by a large portion of the fossil record in general as well as fossil graveyards around the world. The Flood itself and post-Flood catastrophes swept away and sorted countless animals and plants and buried them in water-borne sediment. Some were buried en masse, creating fossil graveyards.

Layers in the fossil record reveal the order of burial, not the order of evolving life. There are fossil graveyards found at many different levels in the geologic column around the world. This particular fossil graveyard, in Eocene rock, is fairly high in the geologic column—high enough that many creationist geologists believe it represents a group of animals suddenly and catastrophically buried amid the unstable conditions in the aftermath of the global Flood. Read more about fossil graveyards in “The World’s a Graveyard.”

So what's wrong with the idea that mammals diversified to fill the niches left by extinct dinosaurs? After all, animals fill niches vacated by other animals in ecosystems all the time. After the Flood, the animals preserved on Noah’s Ark were released to replenish the earth, but some eventually became extinct, just as animals today become endangered and go extinct. (Learn more about this in “How Did Dinosaurs Die?”) Doubtless various animals did move into ecological gaps left as dinosaurs and other now-extinct animals began diminishing in the centuries after the Flood. The natural processes of speciation and variation within the existing created kinds of animals would have resulted in animals that filled those niches.

The problem with the scenario extolled in the Smithsonian’s article is the evolutionary spin it puts on the pit. The notion that increasingly complex animals evolved over millions of years is conjecture imposed on the fossil record. Such a process is unsupported by biological observations. The Messel Pit fossils don't demonstrate upward evolution or transitional forms. They attest to the existence of many diverse, well-developed, fully functional animals that populated a portion of the post-Flood world.

By peering into the Messel Pit through the lens of biblical history, we can see it as a record of a diverse group of animals, including some now extinct, replenishing the earth but cut short by catastrophe and sudden burial. We do owe a lot of our knowledge of these species to the Messel Pit, but the fossils do not track the evolution of mammals or of anything else.