What Color Were Dinosaurs?

by Dr. Elizabeth Mitchell on May 11, 2013
Featured in News to Know
Share:
Email Using:
Gmail Yahoo! Outlook Other

Dinosaur skin sample may yield the secret of its color, but anything about the creature’s age?

An Upper Cretaceous hadrosaur fossil found last year in Grand Prairie, Alberta, is one of only three known dinosaur specimens to preserve a three-dimensional piece of skin. As with other dinosaurs, scientists and artists have never known what color to paint it. Analysis of the skin using a synchrotron at Canadian Light Source (CLS) may offer a clue about what color this duck-billed dinosaur was.

Physicist Mauricio Barbie said, “As we excavated the fossil, I thought that we were looking at a skin impression. Then I noticed a piece came off and I realized this is not ordinary—this is real skin. Everyone involved with the excavation was incredibly excited and we started discussing research projects right away.”

The pigment in skin and feathers is tucked into tiny intracellular packets called melanosomes. The shape of melanosomes can offer a clue to their owner’s color. Fossils of Microraptor and Archeopteryx feathers have been found to contain melanosomes. Analyses comparing the shape of their melanosomes with the melanosomes in modern bird feathers suggested those creatures were both black. But this study is expected to be the first to shed light on dinosaur skin color.

“If we are able to observe the melanosomes and their shape, it will be the first time pigments have been identified in the skin of a dinosaur,” says Barbi. “We have no real idea what the skin looks like. Is it green, blue, orange. . . . There has been research that proved the color of some dinosaur feathers, but never skin.” (As we’ve discussed elsewhere, Microraptor and Archaeopteryx are actually birds.) 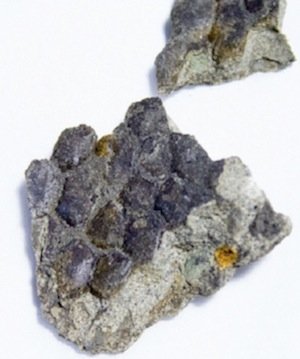 An unusual find, this three-dimensional piece of hadrosaur skin, may reveal the secrets of hadrosaurian color through synchroton-based analysis. Image by Canadian Light Source synchrotron, via www.natureworldnews.com.

A synchrotron accelerates electrons and manipulates them to enable scientists to probe the structure of matter, even at the molecular level. The light it generates causes different kinds of chemical bonds to vibrate in different ways. Synchroton-based X-ray diffraction has been used to document the preservation of molecular keratin and collagen in some fossils. The CLS synchrotron is also being used to analyze “Scotty,” the famous T. rex from Saskatchewan.

Barbi hopes to reflect synchrotron-based infrared light off the skin sample to learn more about the chemical components and intracellular structure. CLS infrared specialist Tim May says, “It is astonishing that we can get information like this from such an old sample. Skin has fat and lots of dead cells along with many inorganic compounds. We can reflect the infrared beam off the sample and we can analyze the samples to give us very clear characteristics.”

Barbi also hopes to learn more about why this particular piece of skin was preserved so well. The clues could involve the original structural and chemical components of the skin, the chemical characteristics of the material in which the hadrosaur was buried, and other factors.

Conventional dates assigned to the rock in which the hadrosaur was found are around 70 million years.

Conventional dates assigned to the rock in which the hadrosaur was found are around 70 million years. Yet these dates are based on a number of unverifiable assumptions. Within the Flood model of geology, many of the fossil-containing rock layers can be best understood to reflect the order of burial during the global Flood, which occurred less than 4,500 years ago. Sudden catastrophic burial was the key to preservation in general. Perhaps more information about this particular fossil will reveal whether it had characteristics that enhanced its preservation. But to suppose this skin fragment survived for 70 million years with some of its cellular structure intact is fanciful story-telling. Some assumptions will have to be made in interpreting the probable color associated with the shape of any melanosomes that may still be present in the skin—since there will need to be comparison with the melanosomes of similar living organisms. (The assumptions will hinge on which living creatures are truly similar enough to dinosaurs for comparison.) Nevertheless, we certainly look forward to learning more about the likely color of this duck-billed dinosaur.

We certainly look forward to learning more about the likely color of this duck-billed dinosaur.