In the Space of Six Days?

Yet today, many godly men who hold to this confessional believe that the words in the space of six days are ambiguous and therefore cannot be used to say that the days in Genesis 1 are six 24-hour days.1 For example, Reformed theologian Dr. K. Scott Oliphint2 of Westminster Theological Seminary argued this way in a debate over young-earth creation:

As Dr. Oliphint noted, the words in the space of six days came from John Calvin’s comments on Genesis. But was Calvin or the WCF unclear about the length of the days of creation?

WCF: In the Space of Six Days

The WCF was written by British Reformed theologians between1643–1649 and is still used as a confessional statement by many churches today. Chapter IV/I states:

It pleased God the Father, Son, and Holy Ghost, for the manifestation of the glory of His eternal power, wisdom, and goodness, in the beginning, to create, or make of nothing, the world, and all things therein whether visible or invisible, in the space of six days; and all very good.

Dr. Joel Beeke, however, argues that by using the term space in the words in the space of six days that the WCF was “talking about a definite span of time, not just a metaphor with six parts.”3 He has also argued that the writings of several members of the Westminster Assembly confirm that they believed in a young-earth and six-day creation.4

John Calvin on the Days of Creation 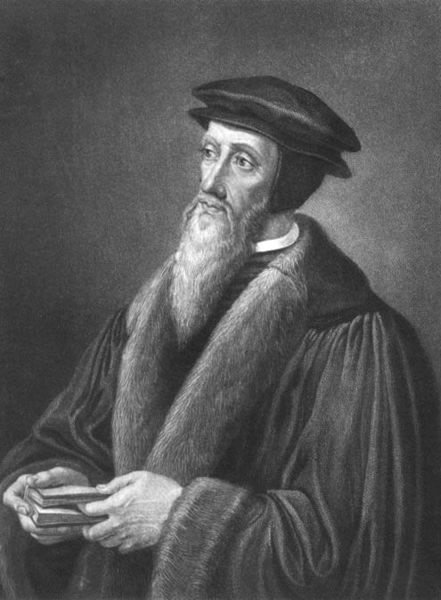 Dr. Oliphint rightly noted that the words in the space of six days were taken from John Calvin’s work on Genesis, in which he states,

Here the error of those is manifestly refuted, who maintain that the world was made in a moment. For it is too violent a cavil to contend that Moses distributes the work which God perfected at once into six days, for the mere purpose of conveying instruction. Let us rather conclude that God himself took the space of six days, for the purpose of accommodating his works to the capacity of men.5

Calvin’s comments here are a rejection of the idea that the six days of creation were a metaphor—a view held in his own day. In his Institutes of the Christian Religion, Calvin affirmed that it took six days to create the world over and against the prevailing view of this day, held by Augustine and subsequently many in the Roman Catholic Church, that the world was made in one moment:

With the same view Moses relates that the work of creation was accomplished not in one moment, but in six days. By this statement we are drawn away from fiction to the one God who thus divided his works into six days, that we may have no reluctance to devote our whole lives to the contemplation of it.6

Calvin clearly affirmed that the days in Genesis 1 were six consecutive days as we understand them today.7 He also realized that God has the ability to create in a moment or by gradual progression, yet he rejected these views:

Nor is it unimportant to observe, that he divided the formation of the world into six days, though it had been in no respect more difficult to complete the whole work, in all its parts, in one moment than by a gradual progression.8

Moreover, Calvin, unlike Dr. Oliphint,9 had no problem with the fourth day of creation being an ordinary day, as his comments on Genesis 1:14 show:

God had before created the light, but he now institutes a new order in nature, that the sun should be the dispenser of diurnal light, and the moon and the stars should shine by night. And he assigns them to this office, to teach us that all creatures are subject to his will, and execute what he enjoins upon them. For Moses relates nothing else than that God ordained certain instruments to diffuse through the earth, by reciprocal changes, that light which had been previously created. The only difference is this, that the light was before dispersed, but now proceeds from lucid bodies; which, in serving this purpose, obey the commands of God.10

Furthermore, Calvin believed that the world had not yet “completed its six thousandth year”11 which demonstrates that he was not unclear as to what the meaning of the text of Genesis was.

These statements from Calvin . . . clearly show that he understood the creation of the world to have taken place in six 24-hour days.

These statements from Calvin in his commentary on Genesis and the Institutes of the Christian Religion clearly show that he understood the creation of the world to have taken place in six 24-hour days. This is evident as he distinguishes the length of the days from other views, such as the idea that the world was created in a moment or the belief that God could have created in a gradual progression. Therefore, it is very reasonable to say that those men who framed the WCF understood the words in the space of six days as speaking of six 24-hour days just as Calvin understood them.

24-Hour Days According to the Text

Dr. Oliphint’s point that the text does not tell us what the “space of six days” is has nothing to do with the text but his prior commitment to viewing the days as “God’s workdays” (the analogical day position); a view that came about as a result of trying to fit the secular humanistic understanding of geological timescale into Scripture.12

The text of Genesis 1, together with Exodus 20:8–11 and Exodus 31:17, gives a clear indication that the days are 24 hours long. Even those theologians who disagree with the young-earth position acknowledge this.13 The key point in understanding the length of the days in Genesis 1 is that they are in fact numbered and are used with the qualifiers “morning” and “evening.” Those contextual clues help us comprehend their meaning.

Exodus 20:8–11 has a number of connections with the creation week: a six-plus-one pattern, the “heavens and the earth,” “rested the seventh day,” “blessed,” and “made it holy.” All of this suggests that one of God’s purposes in creating the heavens and the earth within six 24-hour days, followed by a literal day of rest, was to set up a pattern for His people to follow. Exodus 20:11 also teaches that God made everything in six days using an adverbial accusative of time (“in six days”)14 which indicates the duration of God’s creative activity.

From an understanding of the genealogies in Genesis 5 and 11,15 this seven-day week would have occurred around 6,000 years ago,16 thus ruling out any interpretation that tries to accommodate the current evolutionary framework of cosmology, geology, and anthropology with the Scripture.17 Therefore, the time frame that the Bible gives for God creating the world rules out any old-earth or evolutionary interpretation of Genesis 1.

To accept millions of years of human and animal death before the creation and fall of man undermines the teaching on the full redemptive work of Christ.

Another major problem with the idea of an old earth is the issue of death and suffering. The belief in an old earth is based upon uniformitarian geology, which understands the fossil record to have been laid down over millions of years. Yet, the fossil record contains death, mutations, disease, suffering, bloodshed, and violence. To accept millions of years of human and animal death before the creation and fall of man undermines the teaching on the full redemptive work of Christ (Romans 5:12–21; Colossians 1:15–20). However, Dr. Oliphant accepts that the Fall brought death and suffering into the world.18 So either he has overlooked this fact or is not aware of this issue. His belief in an old earth contradicts his belief that Adam’s sin brought death and suffering into creation. This issue of death and suffering before the Fall is one of the reasons why the age of earth is vital for Christians today to consider as it impacts the Bible’s meta-narrative of Creation, Fall, Redemption, and New Creation.19

Unfortunately, the denial over the length of the days of creation in Genesis 1 as being six 24-hour days is rife within the church. What is more unfortunate, however, is that many of the reasons given for not believing in six 24-hour days simply do not hold up to a careful examination of the text of Genesis 1. Dr. Oliphint’s objections do not seem to be based upon a careful reading of Genesis 1 but rather upon other considerations.