Life as a Bombardier Beetle

The sinister toad closes in on the beetle. Instead of a futile attempt to scurry away, the beetle waits, as though surrendering. Just before the toad’s tongue flicks out to snag its victim, the beetle fires its cannon. Pop! Pop! Pop! Out shoots burning gas. The emissions fire in pulsation, 500 times per second, but the defensive attack is complete before one second passes. Rather than getting a tasty snack, the defeated toad hops away with a mouthful of noxious gasses.

The bombardier beetle’s tail end is equipped with twin “spray nozzles” (or gland openings) to shoot its gaseous ammunition. The gas comes from two reactant chemicals—hydrogen peroxide and hydroquinone. When the beetle contracts its sphincter muscle, these two chemicals mix with catalytic enzymes. The ensuing chemical reaction brings the temperature up to water’s boiling point. While the one-way valve closes to protect the beetle’s organs, out fires the mixture of gas and steam at 212 degrees Fahrenheit (100°C). Some types of bombardier beetles can swivel their gland openings and shoot in nearly all directions using deflection plates. All types hit their target with a marksman’s precision. 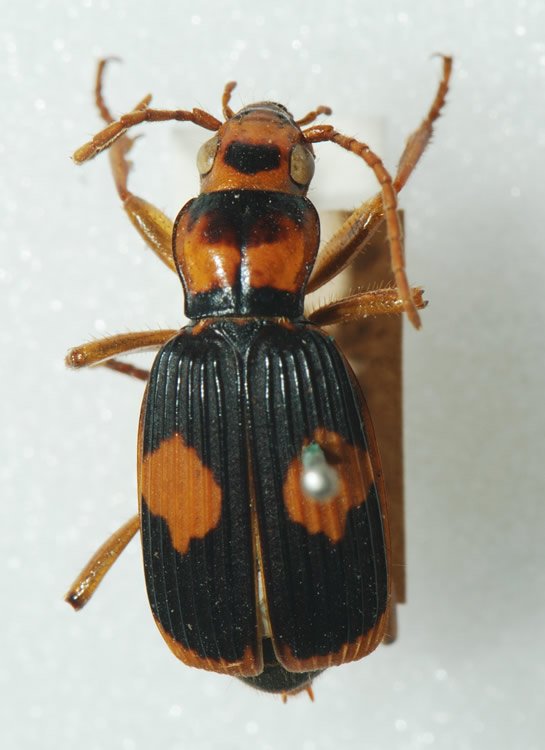 Image by Pengo, via Wikimedia Commons.

How could the “ammunition” and “cannon” have evolved, since all the specific ingredients and mechanisms would need to be present at once to work properly? From the evolutionary worldview, the functionless machinery would have been selected against, since it would add no survival value until all of the necessary components were in place.

Evolutionists have counterattacked with imaginative ideas of how such an elaborate defense mechanism could have evolved. Evolution supposedly progresses from primitive life forms to higher life forms. Because evolutionists postulate that the changes from “goo-to-you” happen through slight, successive modifications over millions of years, the “theory” of evolution cannot be tested. Any design can be explained away by picking it apart into supposed steps. The supposed steps cannot be proven or disproven because no one can go back in time and record the alleged evolution of one animal kind to another.

Evolutionists and creationists both have the same evidence, but they interpret that evidence through their different worldviews. Evolutionists base their beliefs on human reasoning that the design in this world could have happened through small, upward modifications over billions of years. Biblical creationists base their beliefs on God’s revelation, the Bible, which says he created the heavens and the earth with creatures fully formed and functioning according to their kinds. Both evolution and creation require belief in the unseen. Yet in cases like the bombardier beetle, perhaps more faith is needed to believe this complex creature evolved.

If your evolutionist friend refuses to see God’s handiwork in the design of the bombardier beetle, remember that the battle is in the heart more than the mind. Romans 1 says that people inherently know God from creation, yet they suppress that truth. Evolution is a convenient smokescreen for people to live as if the Creator, Law-Giver, and Judge did not exist. If God created us, we are obligated to live according to his standards for his glory. Yet we have all fallen short of God’s glory, rebelling against Him to go our own way in unbelief and disobedience (Romans 3:23).

Because of his incomprehensible love, God sent his Son to redeem sinful mankind. By his perfect life, sacrificial death on the Cross, and victorious Resurrection from the dead, Jesus alone can pay the sin debt of those who turn in “repentance toward God and . . . faith in our Lord Jesus Christ” (Acts 20:21).

Can God transform the heart of a hardened evolutionist? The Creator who spoke light into existence also shines the saving light of Christ into dark hearts: “For God, who said, ‘Let light shine out of darkness,’ has shone in our hearts to give the light of the knowledge of the glory of God in the face of Jesus Christ” (2 Corinthians 4:6).

As a biblical creationist, you may be the channel God uses to share the truth “with gentleness. God may perhaps grant them repentance leading to a knowledge of the truth” (2 Timothy 2:25).