Researcher attacks colleges teaching biblical creation and calls for academic roadblocks for students while failing to interact with creation scholarship. 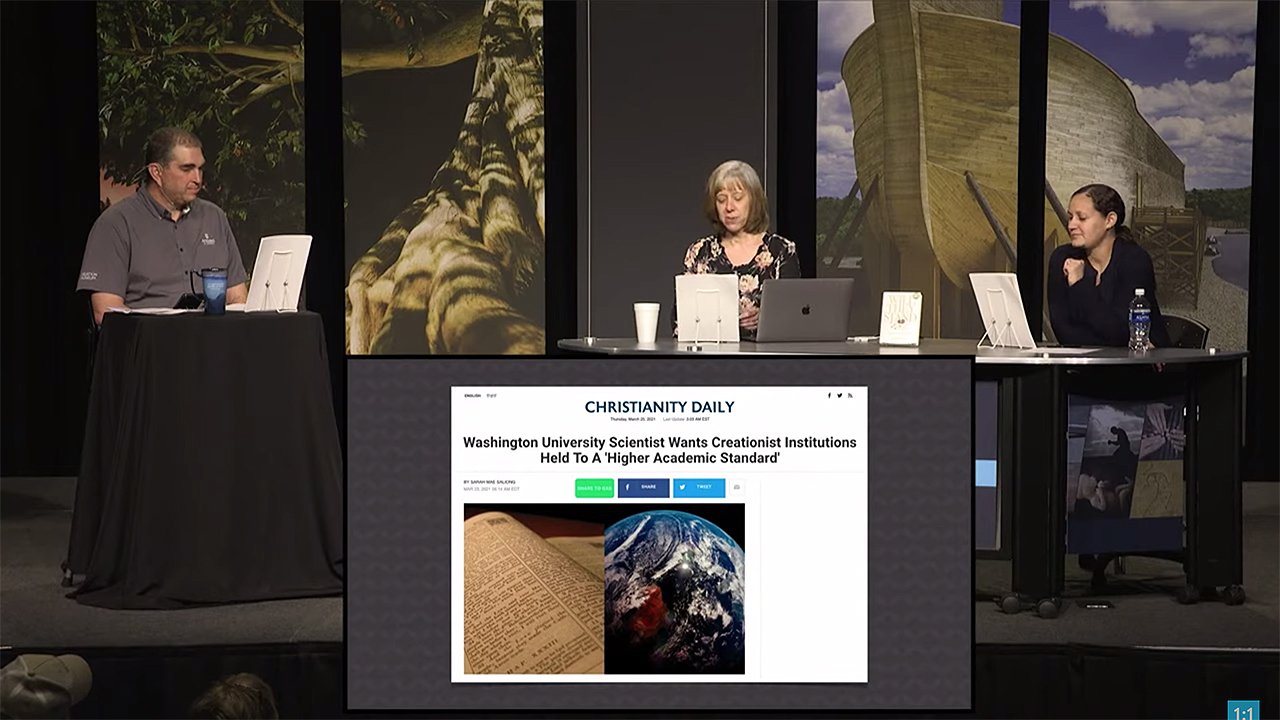 Should Christian colleges be held to a “higher academic standard”? Well, before I answer that, let’s discuss what that question means. Most people reading it might think “well, of course, if Christian colleges are being held to a lesser standard than other colleges, they should be held to the same academic standards as everyone else.” But is that really what the question was asking? (And this really matters, so read on!)

So a researcher at Washington University recently wrote an opinion piece (which I have read in full) that has been shared widely. Consider the following headline from a Christian news publication that reported on the commentary: 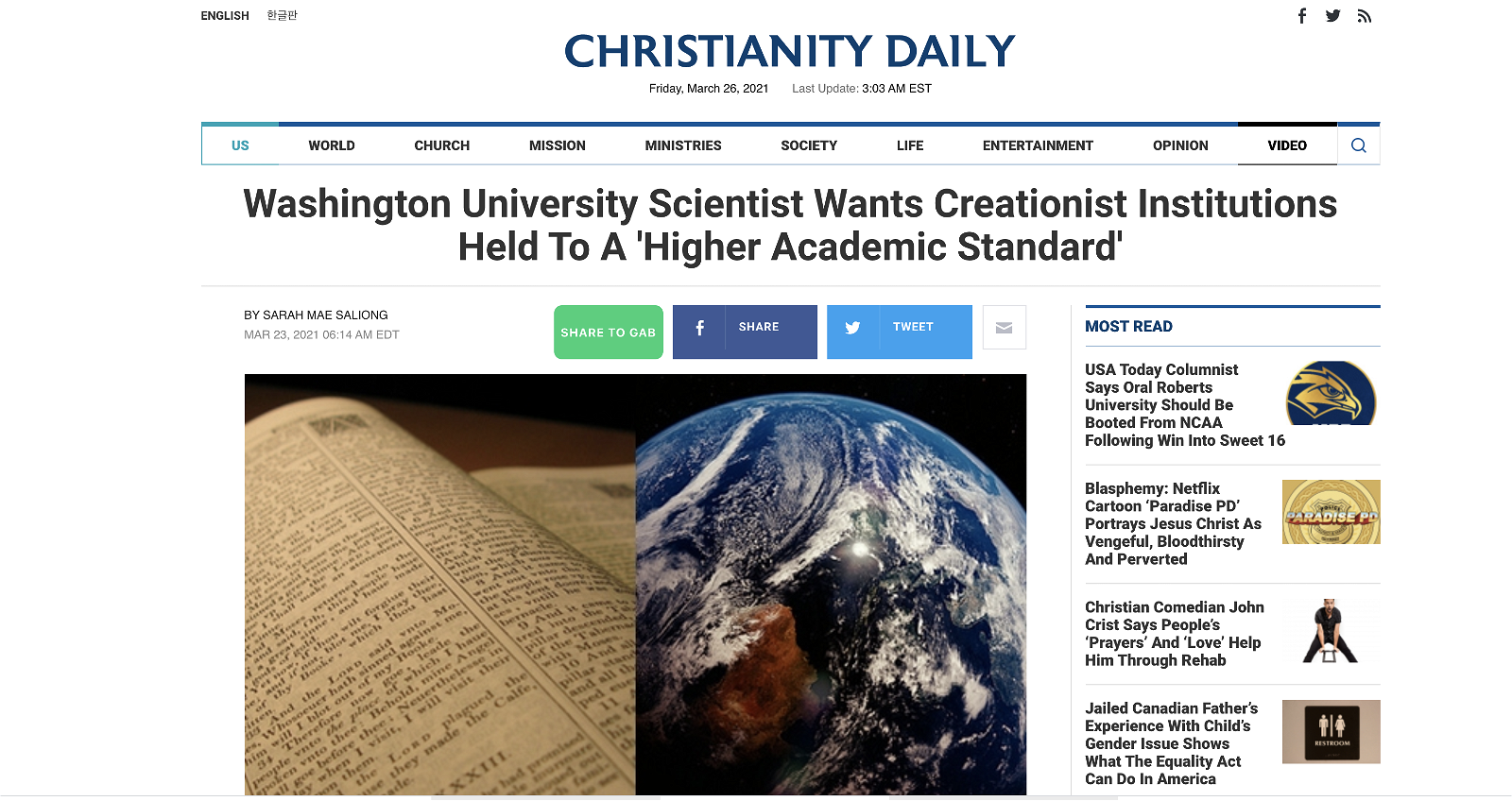 The researcher who wrote the opinion piece is an ardent defender of evolution and also a professing Christian. He claims he believes Adam and Eve were real people, but he doesn’t mean anything close to what you would think he means when he writes that.

He claims he wants schools that deviate from the “national norm” to be held to “higher academic standards.”

Okay, here’s the context for why the researcher is writing this opinion piece. The Council for Higher Education Accreditation (CHEA) is considering whether or not to continue the accreditation of the Transnational Association of Christian Colleges and Schools (TRACS), which itself accredits Christian colleges and schools. He claims he wants schools that deviate from the “national norm” to be held to “higher academic standards.” So what does he mean by that? Well, his piece is extremely deceptive. The way he writes it and what he means by much of what he says is deceptive. He claims that he’s for Christian schools and “academic freedom.” but that’s not really what he means.

Here’s some of what he stated as a “compromise” for Christian colleges:

Credit from courses that include creation science should not be used toward science degrees, nor should they be eligible for transfer to secular institutions.

So, within the context of the full opinion piece, what he means by “national norm” is “teaching evolution.” And by “higher academic standards” he means “teaching evolution.” In his commentary he’s ultimately saying that Christians can have the “academic freedom” to believe what they want but, really, they should be required to teach evolution as fact. And, if they’re going to teach creation (he specifically singles out young earth creation) to students, those classes should be “prominently disclosed, tracked and reported,” including on students’ transcripts. Such an approach would harm students who studied at a Christian college from being able to transfer to a different school (e.g., for grad work) and would require them to take more classes since their hard-earned credits wouldn’t transfer to “secular institutions.” So he’s not really “for” Christian colleges or academic freedom whatsoever!

This researcher fundamentally misunderstands two things. One—there is no neutrality. “Secular” institutions aren’t really secular at all—they are religious (every person has a worldview and thus is religious, even the atheist).

This researcher fundamentally misunderstands two things. One—there is no neutrality. “Secular” institutions aren’t really secular at all—they are religious (every person has a worldview and thus is religious, even the atheist). If you don’t have the foundation of God’s Word, you explain everything without God. That’s the foundation of naturalism which is based on atheism. Evolution is a religion grounded in naturalism and atheism! So the author really insists Christian schools teach the foundation of atheism in the classroom . . . but, don’t worry, teachers and students can have their own personal beliefs on the side.

The second thing the author misunderstands is the nature of science itself. There’s really two kinds of science—observational and historical science. Observational science is directly testable, observable, and repeatable. It is what drives medical and technological innovation. Historical science deals with the past. It’s not directly testable, observable, or repeatable. Evidence must be interpreted. And what you believe about the past (evolution and millions of years vs. the history given to us in God’s Word) provides the framework, the worldview, through which you interpret the evidence.

Ironically, the author sets up the argument as “science vs. religion” while saying that there isn’t really “a tension between religion and science” because what he really means is: evolution and millions of years and the Bible are compatible (which they are not, as documented here and here). But the battle actually isn’t “science vs. religion”—it’s “religion vs. religion.” Will we start with the foundation of naturalism (man’s word) or will we start with the Word of God? That’s the ultimate battle.

Not Qualified to Write on This

In his piece, the researcher singles out Bob Jones University, a school that teaches biblical creation because they start with God’s Word as their authority. They offer excellent science courses in biology, geology, chemistry, etc. because they teach observational science (just like any other school). But when it comes to origins science, they start with God’s Word so they teach a different perspective. Here’s what the president of BJU, Steve Pettit, said, calling this researcher’s claims “misleading”:

Our students, while adhering to biblical viewpoints on the origin and diversity of life, must be fully conversant with, and able to think critically about both models . . . [This] ‘compromise’—excluding credit from courses presenting evidence for multiple models—would marginalize outstanding scientists with biblical viewpoints about origins.

I was recently interviewed about this commentary for a Christian radio program and I was asked if I agreed with someone who had called the researcher’s ideas “dangerous.” I said “absolutely, he’s dangerous because he’s hiding what he’s really trying to do behind academic-sounding words, and people who are Christians will think he’s on side with these colleges. But he’s not at all. It’s all deceptive.”

In this radio interview, I also shared that this is dangerous because secularists are the majority in this country (there’s more on the broad way than the narrow), and when they see him—a professing Christian and a scientist—coming against Christian colleges like this, they will love it, and it will give them even more impetus to attack these colleges. (And, of course, why would the policing of what’s taught be limited to just science classes? What about schools that don’t teach critical race theology, or intersectionality, or “pro-choice” or any of the other “national norms” of our day?). In today’s environment if you’re a political conservative, you can be fired from your job or from teaching. His ultimate aim is to make sure students from these colleges that teach creation can’t get higher degrees or find jobs. He wants to stop these colleges from doing what they are doing, all the while appearing to be on their side. It’s rather like the “wolves in sheep’s clothing” Jesus mentioned in Matthew 7:15.

It’s very sad to see it coming from someone who professes Christ—someone who should start his thinking with the Word of God, from the very first verse, and not with outside ideas.

Yes, this is a dangerous and deceptive way of thinking and it’s very sad to see it coming from someone who professes Christ—someone who should start his thinking with the Word of God, from the very first verse, and not with outside ideas.

Ironically, his personal blog claims to be about “peaceful science” and yet he is consistently “picking fights” with biblical creationists (this article on Christian colleges is just another example), while refusing to engage honestly with what we actually believe and teach! I would urge him to repent of his compromise towards God’s Word and his dishonesty, believe the Bible from the very first verse, and stand for actual religious and academic freedom and diversity of thought in this nation.

This item was discussed today on Answers News with cohosts Dr. Georgia Purdom, Dr. Gabriela Haynes, and Roger Patterson. Answers News is our twice-weekly news program filmed live before a studio audience here at the Creation Museum and broadcast on my Facebook page and the Answers in Genesis Facebook page. We also covered the following topics:

Watch the entire episode of Answers News that aired March 29, 2021.