Fallacies of the Modern Church Part 1

Barriers to Equipping the Saints

Is the sale of Christian resources at services, or at any meeting in a church, prohibited by John 2 or any other Scripture?

As we conduct over 250 events in churches every year, Answers in Genesis occasionally meets people who are concerned about the sale of resources within the church building—particularly at what are called “worship” services. A major focus of our ministry is to equip people with resources they can use to help them answer the skeptical questions of our time. We often encounter Christians who mistakenly liken the practice of making Christian materials available for sale to the “money changers in the Temple” described in John 2:14–16. This is a huge issue for us, not only because we want to equip the saints with faith-building answers, but because we are a ministry committed to biblical authority and thus want to ensure we are not violating any aspect of John 2. We certainly do not want to ever knowingly compromise God’s Word, but desire to always do our best to uphold His truth. 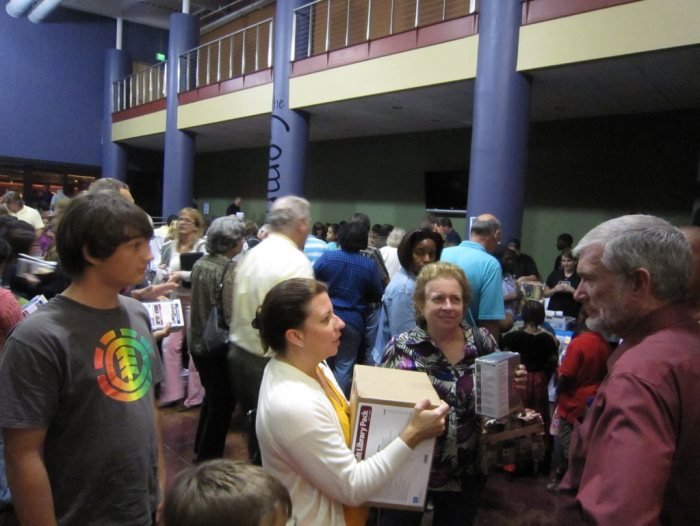 Young people and adults in our churches are hungry for answers. In this photo, here are some people obtaining faith-building resources in the lobby of a Florida church.

Therefore, the question must be asked: is the sale of Christian resources at services, or at any meeting in a church, prohibited by John 2 or any other Scripture?

Three relevant questions must be addressed as we study John 2:13–22:

These questions will be answered in a three-part series starting today and finishing on Wednesday.

What Is the Context of the Account Regarding the Money Changers in the Temple?

Jesus came to the Jerusalem Temple during the time of the Passover. For the Jews, Passover was a big deal. It was the celebration of God’s deliverance of His people from Egypt. Through the blood of a lamb on the doorpost, the Jews escaped judgment and experienced freedom. Exodus 12:1–11 reveals that Jews were to provide an unblemished Lamb—the best of the best—for sacrifice. (If a family was too small to provide their own lamb, they were to join with their neighbor in this provision.)

Exodus 30:13–14 also discusses a tax to be paid to the sanctuary. This is echoed in Matthew 17:24–27 where Jesus talked to Peter about the Temple tax. The money changers exchanged foreign coinage for the accepted currency. John wrote, “And He found in the temple those who sold oxen and sheep and doves, and the money changers doing business” (John 2:14). Why did they sell oxen, sheep, and pigeons when the Jews were required to bring their own? What had become of the significance of choosing the unblemished lamb when one could simply buy something at the Temple? To make matters worse, the sellers seemed to be cheating and taking advantage of guests. Essentially, they were stealing from others who sought to worship. Worship had become commerce.

In other references to money changers in the Temple (Matthew 21:13; Mark 11:17; Luke 19:45–47), Jesus rebuked them for defiling His house of prayer. The sad fact is that the Temple should have been a place of prayer and worship, but had become more of a convenient way for people to simply buy access to God and for others to cheat them in the process. The significance of the blood sacrifice had been reduced to consumerism for convenience.

(By the way, during the Reformation of the 16th century, Martin Luther stood against a similar practice—the sale of indulgences—as he pointed people back to biblical authority and the centrality of eternal sacrifice of Jesus Christ.)

The disciples watched Jesus overturn tables and draw out a whip of cords, and they remembered the Scripture, “Zeal for Your house has eaten Me up” (Psalm 69:9). The Jewish sacrifices pointed to the one eternal and all-encompassing sacrifice of atonement for salvation: a Savior. By making access to God a matter of commercial convenience, these people were bringing dishonor on Christ and a rebellious spirit toward the Father.

In John 2:19, Jesus brought great significance to this encounter. He said, “Destroy this temple, and in three days I will raise it up.” As the ultimate Passover Lamb, Jesus would negate the need for the physical Temple and animal sacrifices. Verse 21 reveals that Jesus has become for us the Temple access to God, and we come to the Father through Jesus Christ.

The Temple and the sacrifices performed in it pointed to Jesus Christ and His future work on the Cross. This is truly significant, as the Temple was a shadow of Jesus; therefore, when the Jews desecrated the purpose of the Temple, they were desecrating the person of Christ. Christ was in their very midst watching them do it. True worship in spirit and truth has never been something to be bought or commercialized. Salvation is free, and Christ, our true access to God, cannot become a consumer’s appeasement of convenience.

In short, the passage about the money changers in the Temple has nothing to do with the provision and sale of resources that equip people to become more intimate worshippers in spirit and truth. In reality, the money changers rejected the main point of the Temple—pointing to the coming Messiah. This passage is about the commercialization of the sacrifice that was pointing to the Lamb of God. Lastly, it shows that God’s people failed to acknowledge His presence among them.

Today, however, the presence of God is not in a temple structure located in Israel but in Jesus Christ in our hearts and lives.

The accusation that ministries like AiG shouldn't sell resources at church meetings because of the so-called “money changers” argument is a false one built on an incorrect understanding of what is outlined in God's Word.

Also, the physical church building today is not a temple. A church building is a gathering place for Christians who themselves have become “the temple.” Sadly, AiG is often restricted or denied the opportunity to equip Christians at Sunday church gatherings, which are optimal times to reach the largest number of people (including young people). Meanwhile, each day of the week, the secular world is marketing an anti-God philosophy to church attendees through television, the internet, secular textbooks, advertising avenues, etc. Oh how we need to be diligent in getting life-changing resources into the hands of God’s people so they can defend the Christian faith and help overcome the doubt that leads to unbelief (which is resulting in two-thirds of our young people leaving the church by the time they are college age).

Let’s be like the Bereans in Acts 17 and judge what we think we believe against what Scripture clearly teaches. Let’s get rid of incorrect views of the church that are hindering getting the much needed answers to an increasingly skeptical generation.

Parts two and three of this article will take a closer look at how the modern church should view its buildings and the role of worship in those buildings. Part two will be posted tomorrow, and part three will be posted on Wednesday.