Declaring the Glory of God to America’s Public School Teachers

Each year for about 20 years now, AiG, through a ministry friend and educator, has been an exhibitor at the large National Education Association (NEA) annual convention. Once again, Tony Ramsek of our staff (IT department) headed our team as hundreds of public schools teachers and administrators dropped by the booth to engage our staff on worldview issues, hear the gospel, and leave with AiG resources on the Bible’s authority. Here is the report Tony filed at the end of the convention, with some photos to follow.

Driving home the truth of Jesus Christ as Creator and Redeemer, AiG’s volunteer team of evangelists engaged the lost world at the annual public school teachers’ NEA convention. For 20 years AiG has been donating thousands of resources to the NEA Creation Science Educators Caucus. In turn, the caucus distributes thousands of DVDs, books, and Answers magazines to the teachers for free! This year’s theme for our gospel outreach (with a banner declaring it) was “The Heavens declare the glory of God . . . but the fool has said in his heart “There is no God.’”

The NEA is one of America’s most liberal, pro-gay rights, pro-abortion, anti-creation organizations. While it is a teachers’ union, the union has apparently been overrun by the LGBT lobby, secular humanists/liberals, and anti-Christians.

At the Creation Science Educators Caucus booth, where several of our volunteers served, there were many memorable moments. For example, Mark Nakoff (AiG’s master electrician) and I took the opportunity to share the gospel of Jesus with two homosexual men who claimed to be “husbands” as well as “Christians.” We also challenged their worldview of “if it feels right, do it” when they claimed they were born with same-sex attractions. We shared the truth that we are all born sinners, as Psalm 58:3 tells us: “The wicked are estranged from the womb; these who speak lies go astray from birth.” As sinners by nature, some might be born with the propensity to lie, some with a higher inclination to steal, and perhaps some with a bent toward same-sex attraction. We showed them that just because sin comes naturally, it doesn’t make the sin right. Homosexual behavior is, according to the Lord, an abomination, but it is not the only abomination, as Proverbs 12:22 tells us that “lying lips are an abomination to the Lord” as well. But all sin can be forgiven and overcome with the enabling of the Holy Spirit, through repentance and faith in Jesus Christ, as 1 Corinthians 6:9–11 teaches us:

Steve Ham, director of AiG’s international outreach, joined the team this year, and he had several opportunities to present the gospel of grace to many individuals, including a Roman Catholic priest who was there with the NEA Ex-Gay Caucus as a researcher and writer on homosexuality. We witnessed to him and shared that our main goal is not to convert evolutionists into creationists, nor should their main purpose be to convert homosexuals into heterosexuals; rather, our primary commission is to be used by the Holy Spirit to proclaim the gospel of Jesus Christ, which has the power to convert sinners into saints and then disciple those believers into all holiness.

We praise the Lord and are thankful for all the prayers for all the teachers we were giving free resources to and who heard the gospel. Please pray that the Lord would continue to convict the unsaved teachers of their sin and their need for Jesus as their Lord and Savior.

Here are some NEA-related photos that Tony sent us. You’ll notice the caucus booth that AiG staffed was next to an exhibit that promoted the homosexual agenda and was also near the booth of a pro-evolution group. 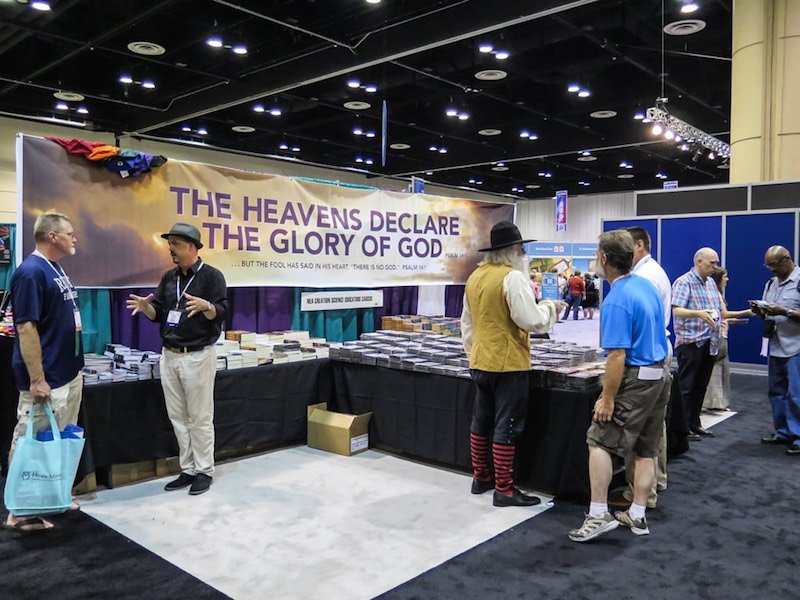 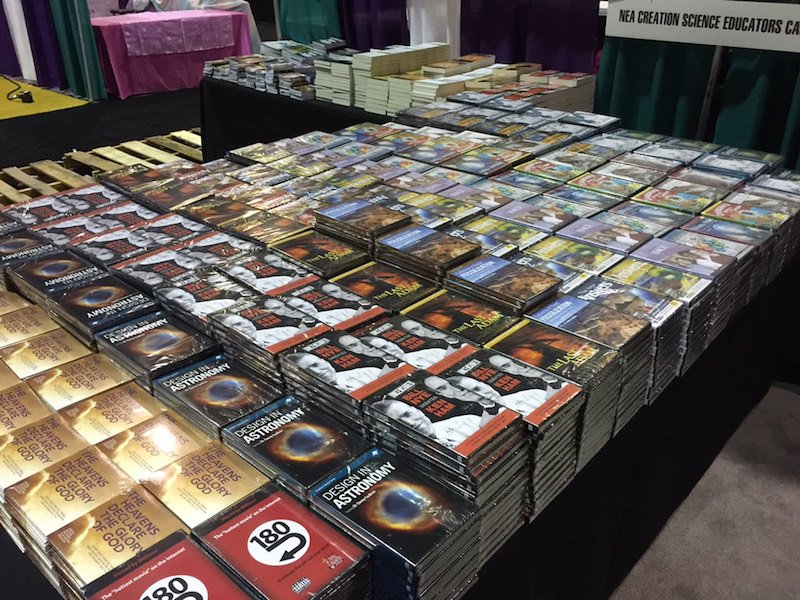 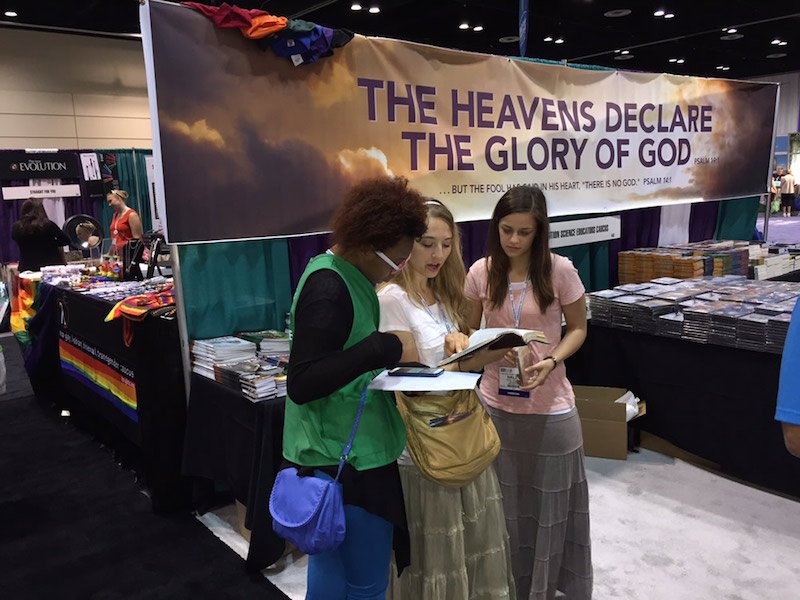 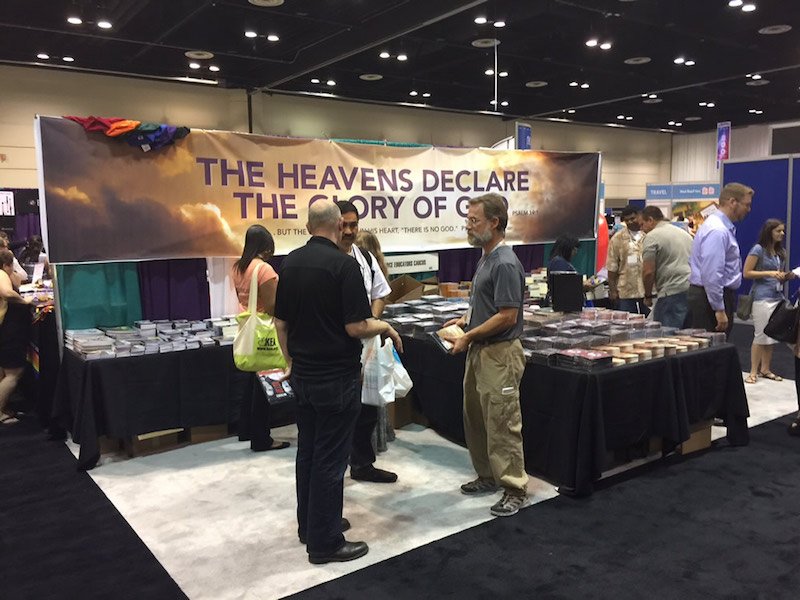 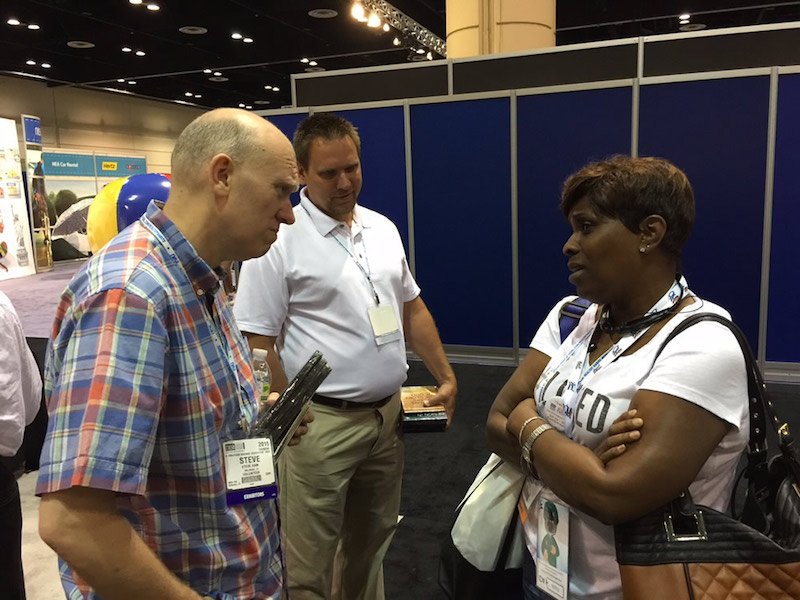 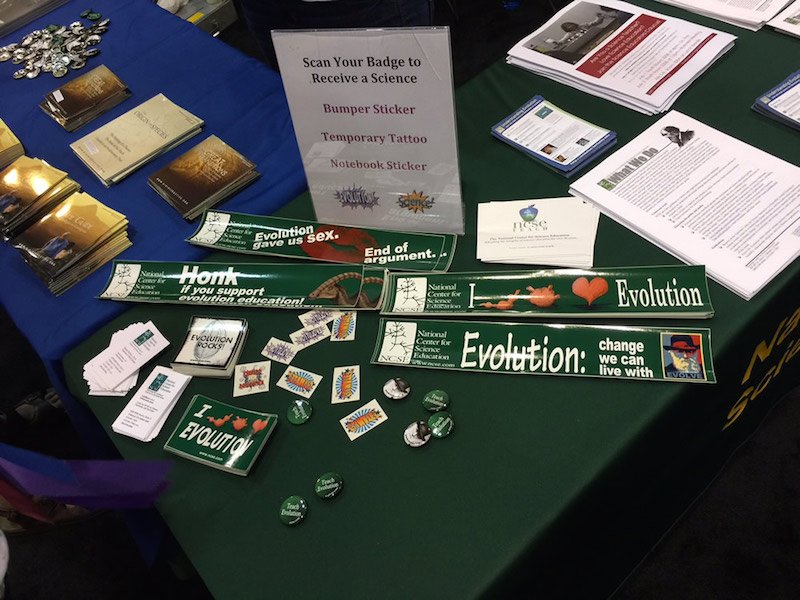 Previous Article “Thank You For Being a Missionary To Our Nation” Next Article The Future of the LGBT Agenda?