BioLogos, an organization that seeks to teach Christians that evolutionary ideas are supposedly compatible with Scripture, continues to try to influence families toward giving up a historical Genesis. A recent article appeared on the BioLogos website written by Praveen Sethupathy, an assistant professor of genetics at University of North Carolina at Chapel Hill. Titled “Conversing With Our Children about Creation and Evolution,” the article by Sethupathy explains where he believes the church has gone wrong in the origins debate.

He writes that he desires to honor God’s Word as the authority when it comes to our origins:

It is troubling to me that some of our communities teach that one, and only one, interpretation of Genesis 1–2 should be accepted as Biblical. For example, I am aware of churches across our country where young earth creationism (YEC) is taught as the only legitimate Christian position, Vacation Bible School curricula are devoted entirely to YEC, and Sunday school libraries are filled with books that teach that there is a Biblical imperative to believe that dinosaurs and humans co-inhabited the earth. It is important to note that such hardline positions often arise not out of malice, but out of a heartfelt desire, which I passionately share, to respect the authority of the Word of God. But I believe that we must be equally cautious about forcing interpretations that Scripture itself does not demand.

Now, Genesis 1–2 are obvious in what they demand as an interpretation. In fact, this is the focus of my newest book (to be released this fall)—Six Days: The Age of the Earth and the Decline of the Church. In it, I show how many Christian academics and pastors are abandoning the plain meaning of the text of Genesis in favor of popular views of our origins, all of which are rooted in evolution and/or millions of years.

Sethupathy’s view is indicative of this very epidemic. He finds it “troubling” that many churches hold firmly to a historical Genesis (and really, to the authority of God’s Word) and teach it to their children. He continues, “I now mentor students who were taught to view a single position on Genesis 1–2 as a central tenet of their faith, and in some instances were actively discouraged from expressing their doubts or openly wrestling with their questions.” Now, we at Answers in Genesis certainly don’t discourage people from critical thinking—in fact, we encourage it! Parents, teachers, and church leaders should teach children to think critically about the assumptions underlying various evolutionary ideas.

Parents must teach their children solid, biblically based apologetics, and that includes engaging evolutionary ideas from the biblical perspective. So many Christians who have compromised with evolution and millions of years end up abandoning a proper interpretation of Scripture (using the historical-grammatical hermeneutic) when it comes to Genesis chapters 1–11 because “science” (i.e., evolutionary ideas) says that the universe is billions of years old. But they have no problem with the miracle of the Virgin Birth or the Resurrection!

Now, I’ve said and written numerous times (and I make this point in my new book as well) that a belief in a young earth is not a salvation issue—but it is an authority and a gospel issue! What’s to stop the person who has denied the miracle of creation in Genesis 1 from denying the miracle of the Resurrection—a doctrine, according to the Apostle Paul, that is absolutely central to our faith (1 Corinthians 15:17)?

Sethupathy offers as support for his idea a short story of how his son Caedmon wrote a story about a world where God uses a “process” to create. Sethupathy writes, “Creation by process made God seem more powerful and real to Caedmon, not less.” But it’s not our feelings or experiences that determine what Scripture means—it’s the plain words of Genesis 1–2 that tell us how the world came to be. Creation by speaking the universe into existence from nothing doesn’t make God any less powerful, and He doesn’t need us to find ways to make His method of creation “seem more powerful.”

The answer is simple: God created the universe and everything in it in six, approximately 24-hour days. Parents, teach your children what the Word of God says, and teach them how to think critically about evolutionary ideas and assumptions in light of the highest authority in our lives—the Bible. One resource to help you is my new video Rescuing Our Kids from the Lie: 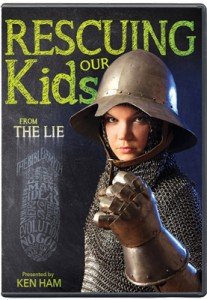