Those of you who have been following the Answers in Genesis ministry for several years are probably aware that in early July of every year, AiG shows up in a most interesting place—at the annual convention of the National Education Association (NEA). We are there as the guests of the NEA Creation Science Educators Caucus, which is allowed to have exhibit space inside the massive expo hall—it’s offered to various caucus groups within the NEA. We blogged about this Chicago NEA convention on a special part of our website—see this blog post.

AiG has joined with the CSEC for perhaps 15 years now, and it has been likened to AiG appearing in a “lion’s den” because of the very liberal nature of most of the members of the NEA union. Just about every socially liberal, leftist group seems to be represented there, and some of the attendees who drop by the CSEC/AiG booth can be quite hostile to our volunteers there (including a few AiG staff who come to the NEA Convention during their vacation time, so they can engage with people and share their faith). A photo below shows one very angry atheist who dropped by the booth, who was passing out flyers for the Communist Party USA. 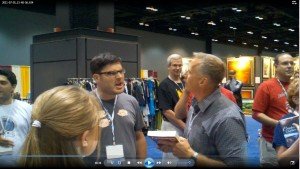 Notice (from the photo below) that we had a rather bold banner this year. Perhaps that is why we got such a rather hostile reaction from some attendees. James Opperman of AiG is on the left, Nicki Biegler is in the middle, and Dan “the Animal Man” Breeding joined us, along  with some his fascinating live animals—they were a huge draw. 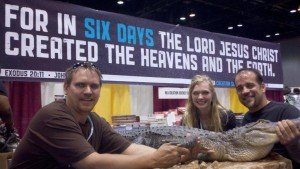 Tony Ramsek of our IT department has led this effort for several years now, and through the generosity of one of our long-time friends in Pennsylvania (he financially underwrites most of the costs), we are also able to share with secularist school teachers and administrators that there is a different—and more reasonable—worldview related to origins and the meaning and purpose of life, and also to minister to Christian educators who attend the convention (they are, in a sense, “missionaries” to children in the secular world of public education). More than anything, the NEA outreach is a highly evangelistic effort, and I praise God for the several volunteers this year who came out (three from the Bright Lights ministry) and engaged NEA attendees with the gospel. And they passed out an incredible amount of AiG resources—over $50,000 worth!

In fact, almost everything we brought (about 9,000 items—DVDs were popular, as well as our Kids Answers Books) was gone (distributed at no charge). We ask you to pray that the DVDs will be watched, the books will be read, etc. by those who picked up the resources—that they will not end up in a trash can or on some dusty shelf.

Here is a photo of just some of the thousands of resources we had on display at the NEA convention: 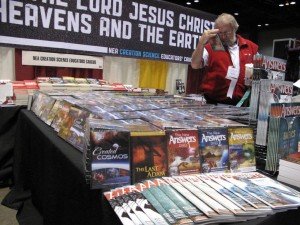 I encourage you to visit our website every weekend for our news feature News to Note, where Dr. Elizabeth Mitchell analyzes news items of the previous week that relate to the evolution/creation debate. It’s a great way to stay on top of science news.

One of the items discussed this weekend by Dr. Mitchell is how evolutionists continue to recognize (though they are often stubborn to realize this) that the evidences they have been interpreting as “proof” of evolution must be discarded. That has been the case recently with the classic, supposed bird-reptile fossil Archaeopteryx, which creationists have dismissed as a "missing link" for decades. Read Dr. Mitchell’s careful analysis, and then read this quote—it’s a quotation from page 458 of the article Dr. Mitchell cited from Nature magazine (that she didn’t have room to include in her piece on Archaeopertyx):

“Archaeopteryx has also been in the cross-hairs of creationists, and remains a lightning rod for political debates and legal proceedings about teaching evolution in schools. Of course, Xu and co-workers’ finding only deepens the impact of Archaeopteryx by highlighting the rich evolutionary nexus of which it is a part, but how the ever-clever creationist community will ‘spin’ it remains to be seen.”