Virtually every day, one of our staff members does an interview with a media outlet. Several media representatives dropped by the Creation Museum last week, and also a few interviews were conducted over the phone.

This past week, Dr. Jason Lisle—our astrophysicist—was invited to be on a BBC radio program out of Southampton, England (where I spoke a couple of weeks ago). We were told that it was just going to be an “examination of creationism.” Well, we are somewhat leery when it comes to dealing with the British media—by far, British journalists and commentators (and particularly those from the BBC) are the most mocking about biblical Christianity of all the media we’ve worked with over the years. We have had probably 20 different countries send reporters to the Creation Museum since we opened 22 months ago, and most of them have been fair and balanced in their coverage—but not so with the typical British reporter.

That’s why it was not too surprising that when Dr. Lisle went on the air to be interviewed by the BBC, he quickly found out the BBC had not told us the truth—it turned out to be an attempted ambush—not an interview (as we had been led to believe), but a creation/evolution debate. On the other line was perhaps America’s best-known evolutionist defender, Dr. Eugenie Scott, whose organization has as its sole purpose to counter creationist efforts wherever they can and to uphold evolution. Of course, the BBC didn’t happen to tell us that it was to be a debate, and they didn’t happen to tell us there would be a debate opponent, and they didn’t happen to tell us who the debate opponent would be! Actually, the BBC has done this before—it happened to me a couple of years ago!

One of the BBC hosts, thinking he knew more than he really did about the creation/evolution issue brought up the old question: Doesn’t carbon dating show that the earth is very old? Well, Dr. Lisle gets that question frequently, so he put that one away quite easily. Dr. Scott, however, chimed in and said something to the effect that radiometric dating methods—not carbon dating—give an old age for the earth.

Oh, we just love dealing with the obviously anti-Christian British media. But we’ll continue to do so (with few exceptions), for that is a nation that desperately needs the creation/gospel message – especially during this “Year of Darwin” (his 200th birthday is this year). By the way—the BBC has not responded to our publicist who has challenged them concerning their deception. Then again, for those people who don’t believe in God and there is no absolute authority, not telling the truth and deception would not be ethically wrong—as they have no basis for right and wrong! So , I guess we should say that this is just an example of BBC staff being consistent with what they believe!

Three creation speakers we're getting to know better visited us on Thursday. Dr. Ben Scripture (yes, that's his name) was here with his dentist wife Karen. He has a creation ministry based in northern Indiana. He holds a PhD in biochemistry from Notre Dame. During his doctoral studies, a well-known evolutionist tried to get him expelled from the program after his creationist beliefs were revealed. Dr. Scripture used to teach at Grace College in Indiana. Find out more about this biochemist at http://www.scriptureoncreation.org/

Tony Breeden (see photo) informed our staff on Thursday about an outreach he leads and that we're finding more about called the Creation Letter Project. This is in response to the efforts of evolutionists who are recruiting pastors to lend their names to a petition that declares that evolution and Christianity are compatible (it has about 12,000 clergy signed up). Tony is asking pastors and others to show their support for biblical creation at www.creationletter.com and to give Tony their names. 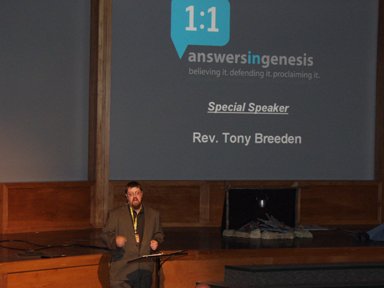 We'll keep the identity of our third visitor confidential, though it’s not at his request. He is getting his doctorate in anthropology and already teaches at a secular university, and he has become a good friend of our ministry. We don’t wish to jeopardize his pursuit of a PhD by naming him and possibly having him experience what Dr. Scripture went through in the 1990s.

On Thursday I mentioned the interview (really a debate) between atheist Michael Shermer and AiG research scientist Dr. Georgia Purdom, which was videotaped by colleagues of Dr. Shermer’s and posted recently. The “debate” took place here at the museum (inside our café)—it has turned out to be very popular on the internet. As you watch the video here, note how many “views” (the view count is under the screen) web visitors have made as they watch this fascinating 25-minute exchange. Dr. Purdom does extremely well in dealing with this well-known atheist debater. However, note also the name calling in many of the responses!! Sadly, that is typical of many of those today who oppose creationists.

I am in Florida today, ready for speaking four times at Starkey Road Baptist Church, Seminole, on Sunday. You can obtain details from the event calendar on the AiG website.