I’m sorry I wasn’t there the day that well-known pastor Johnny Hunt and his wife, Janet—of the influential First Baptist Church of Woodstock (Georgia)—dropped by Answers in Genesis and our museum, along with some colleagues. Pastor Hunt is best known for being the current president of the Southern Baptist Convention, America’s largest Protestant denomination. He was in Kentucky to do two things: 1) scope out the facilities in Louisville for the national convention of the Southern Baptists (held this June) and 2) to fulfill a promise he made to us last year when I spoke at a Bible conference at his church near Atlanta: that is, to visit our Creation Museum (90 miles from Louisville).

In the photo taken of Johnny and the group that accompanied him, Johnny is at the far right, and his wife, Janet, stands in the middle (in red). In the next photo, Carl Kerby, one of our speakers, points out the fascinating stone wall inside the museum’s portico as Johnny and his group learn about its significance to Flood geology. 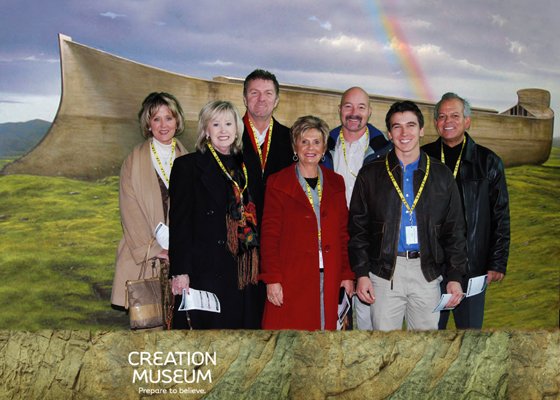 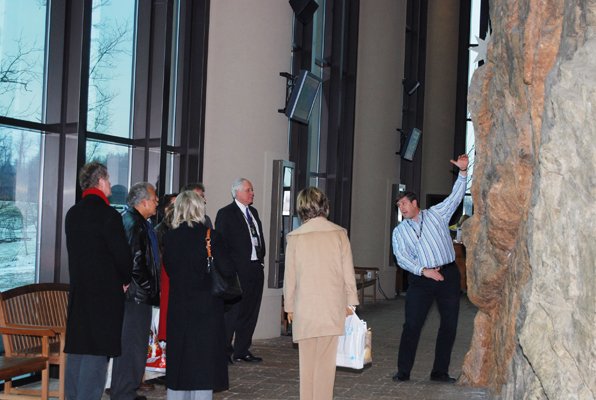 Find out more about this fascinating man who leads the Southern Baptists during a two-year term at:

A photo of me speaking at a Bible conference held at Pastor Hunt’s church last year (though I’m way back in the photo in this huge sanctuary!) is below.

Also here last week–giving a devotional to our staff (almost every Thursday we have a special speaker address the staff to start off the morning, and sometimes it’s a staff member who shares something)—was a local pastor: Kevin Milburn. Kevin came to northern Kentucky to pastor Union Baptist Church less than a year ago. He holds a doctorate from Liberty University in Virginia. 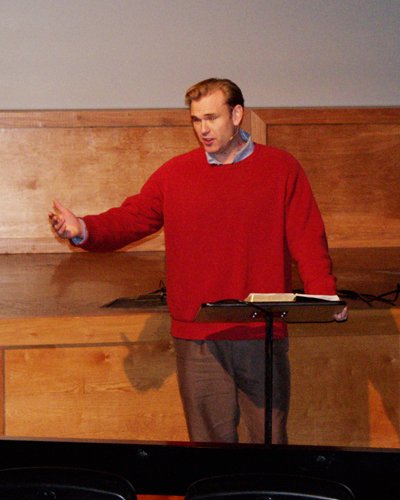 By the way, I will be speaking at the church associated with Liberty University (it’s right next door), the famous Thomas Road Baptist Church, where we will hold an “Answers for Darwin” conference next month, February 15–17. It’s a free national conference, and one of our opportunities this year to counter the celebrations surrounding Darwin’s 200th birthday.

(1 Chronicles 28:9) And thou, Solomon my son, know thou the God of thy father, and serve him with a perfect heart and with a willing mind: for the LORD searcheth all hearts, and understandeth all the imaginations of the thoughts: if thou seek him, he will be found of thee; but if thou forsake him, he will cast thee off for ever.

We have one life goal–to know the Lord Jesus Christ more as our intimate friend, to unreservedly yield more of our will to His Lordship & to serve Him more. Thanks for stopping by and thanks for praying,