Mocking the Museum and God’s Word

Our regional Recorder newspaper is featuring an article this week about a local artist who is exhibiting a sculpture (and woodcut prints) that mock the Creation Museum. In fact, ultimately it is God’s Word that is being mocked. The sculpture features a “bathtub Ark” with a dinosaur eating a human! This of course makes mockery of the account of Noah’s Ark in the Bible. When people come to the Creation Museum they will see models and paintings of Noah’s Ark based on the REAL description and dimensions given in the Bible—and the real Ark looked NOTHING like the “bathtub Ark” this sculpture depicts. It is also a reminder to Christians who have books for the children picturing Noah’s Ark as a “bathtub Ark.” Such fairy-tale-looking Arks lead children to believe the account of Noah’s Ark is just that—a fairy tale.

The article in the Recorder states:

Nationally known sculptor and artist, Stephen Geddes of Mt. Washington will exhibit his newest sculpture and series of woodcut prints at the Sandra Small Gallery in Covington, Ky. "Insider/Outsider: Alternative Views of America" runs through Nov. 7. Geddes' exhibition will include a new piece "Jurassic Ark," subtitled, "Noah Saves the Dinosaurs." The "Jurassic Ark" sculpture is the artist's "sardonic response" to the Creation Museum, a 60,000 sq. ft. museum filled with 160 exhibits of biblical history, located in Petersburg, Ky.

Geddes said he was intrigued by the amount of attention given to the museum by the media. "Creationism is a very simple answer to a very complex problem as to why are we here," he said. His woodcut prints are interpretations of his sculptures that offer art patrons an opportunity to purchase and display his art without the space requirements that his larger sculptural works require. Here is a picture (taken from the report) of this artist’s “bathtub” rendition of Noah’s Ark meant to mock the Creation Museum. The artist needs to come to the Creation Museum to see what they REAL Ark may have actually looked like. We here at AiG discourage people from obtaining pictures or sculptures of these mocking Arks. 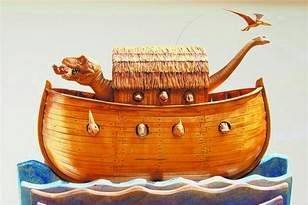 You can see another picture and read the whole story at: Art responds to Ky. museum.

I have reprinted the article written by Mark Looy from the AiG website about the debate on www.beliefnet.com that will begin today (it was originally to have been posted late Monday) as the first two postings will be put up on Beliefnet.com.

AiG rarely has the opportunity to engage in live creation/evolution debates nowadays. Yes, we have participated in such forums over the years, even at places like Harvard, but those debates were many years ago. The word in the evolutionist community today is to turn down invitations to debate creationists, the rationale usually going something like this: “Don’t give a creationist the legitimacy of being on the same platform as an evolutionist.”1

This week, however, we have the rare opportunity to debate an evolutionist. While it is not a traditional debate in front of a live audience, we welcome this chance to be featured in a special forum on a very popular website, www.BeliefNet.com. The sad part is that the evolutionist being debated is a Christian professor at Eastern Nazarene College (since 1984) and also Director of the Forum on Faith and Science at Gordon College, both in Massachusetts. Dr. Karl Giberson is the author of Saving Darwin: How to be a Christian and Believe in Evolution, and beginning today and over the next few days, he and AiG President Ken Ham will have a running debate on the topic of whether Christianity is compatible with evolution.2

BeliefNet is a web forum of religious topics with no tie to any religious group. In fact, a Jewish columnist (and the site's editor-in-chief) wrote an excellent article on our Creation Museum earlier this month. BeliefNet has the goal of giving its web visitors “access to the best spiritual teachers and clergy in the world, thought-provoking commentary, and a supportive community” from all religious faiths. This year, the site received the Online News Association’s top award for online commentary.

Giberson is known as a science-and-religion scholar who has a particular interest in the creation/evolution controversy. He was the founding editor of Science & Theology News (which went out of business in 2006). One of his other books is Worlds Apart: The Unholy War Between Science and Religion. He is sadly representative of a growing number of evangelical college professors who teach molecules-to-man evolution as fact in their classrooms (e.g., Calvin College in Michigan and Wheaton College in Illinois).3

Over the next few days, check www.BeliefNet.com for what promises to be a lively online debate on what Christians should believe about Genesis.

(1 Thess. 4:13–14) But I would not have you to be ignorant, brethren, concerning them which are asleep, that ye sorrow not, even as others which have no hope. For if we believe that Jesus died and rose again, even so them also which sleep in Jesus will God bring with him.

The Lord Jesus Christ has transformed death for His people as a little snooze before waking up to the wonderful glory of His presence. Thanks for stopping by and thanks for praying,