In the Site of Mount Ararat

Sometimes—I must confess—I get my countries mixed up. I find myself going to my world globe—often—to locate a country to orientate myself to their geography and location. Answers WorldWide is now working in so many of the 221 countries that it is hard to keep each country straight in my mind.

An example of this is a recent article from Armenia that tells of eager students receiving training and books from WorldWide. Now there are 18 countries whose name begins with the letter “A” and I had to stop and think . . . where is Armenia?

Well, the Republic of Armenia lies in the highlands surrounding a familiar mountain for Bible readers; it is Mount Ararat. This Biblical mountain is where the Bible says the Noahic Ark came to rest after the global flood. Even though the actual mountain is now in Turkey, it can be clearly seen by all Armenians and is on their national emblem.

In fact, Wikipedia says that the name Armenia came from the legendary Patriarch of the Armenians and that he was the great-great grandson of Noah.

It is very exciting for our WorldWide team to hear reports like the one below and realize that all of our work and traveling is really reaping huge results around the world. Please continue to pray and give so that we can ultimately reach a greater portion of the 221 countries of the world.

Here is the photo you requested. I am at the far left, obviously. I taught 20 students at the Theological Seminary of Armenia, located in Ashtarak, about 30 minutes northwest of Yerevan, the capital.

<>Prior to my arrival the students were given The Answers Book and were requested to read it by my arrival. They were given 50 hours of instruction over a two week period. First, “Why Won’t They Listen,” “The Evolutionary Sequence,” “The Bible Can Be Trusted,” the 7Cs, “The Relevance of Genesis,” and “Six Days or Millions of Years” were presented. Then the first eleven chapters of Genesis were minutely dissected from the creationist standpoint in 18 PowerPoint presentations. Those were followed by 22 more PowerPoint’s focusing on various areas of science and showing the Scriptural basis for interpreting the science, and the final PowerPoint presented was “Hitler, Häckel and the Medical Consequences of Evolutionary Thought,” demonstrating the logical outcome of evolutionary thinking as evidenced in 20th and 21st Century world events. Two written exams and a lab practical on fossils and rocks were also given.

At the end of the two weeks they were given the nine other titles also provided by AIG and each a creation tie paid for by my church, Black Mountain Baptist.

These students will never forget that experience.

Thank you for gifting the Russian texts to these students and to the Seminary Library. 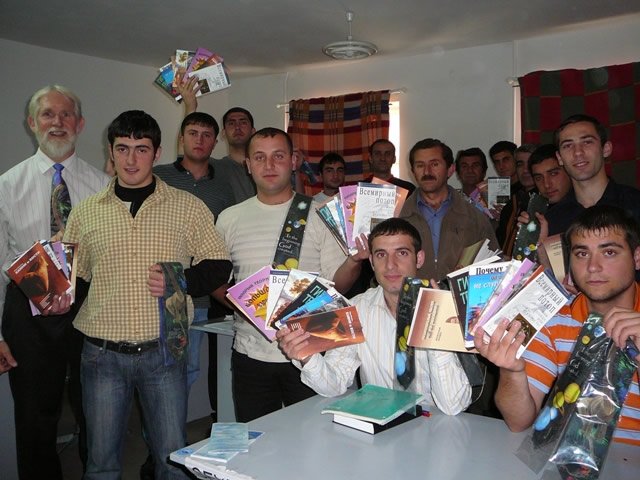 We praise the Lord for Dr. Kezele and the work he is doing to reach this particular people for Christ.

Thanks for dropping by our blog; hope to see you again very soon.

Previous Article ITS Update Next Article Next stop: India!