Satan, the Fall, and a Look at Good and Evil

Did the Serpent Tempt Eve While in the Tree of the Knowledge of Good and Evil?

Christians generally use illustrations of the Garden of Eden that place the serpent in a tree—usually the Tree of the Knowledge of Good and Evil. In fact, we do so at the Creation Museum in Petersburg, Kentucky: 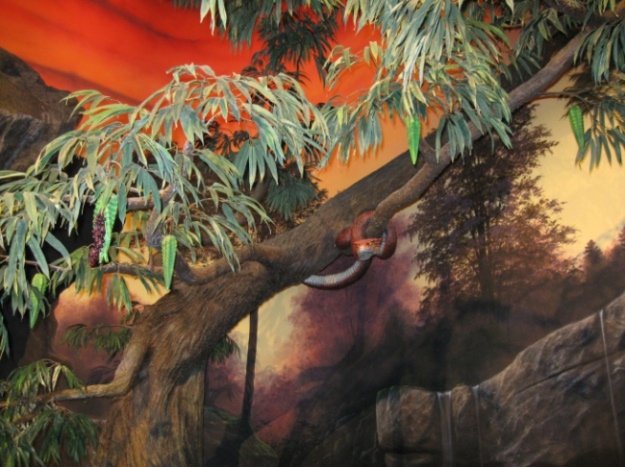 Is there any justification for such a view?

What Does Scripture Say?

Nowhere in the Scriptures do we read that the serpent was in the tree—any tree. In fact, the opposite may well be deduced, as the serpent was compared to the beasts of the field twice:

Now the serpent was more cunning than any beast of the field which the Lord God had made. And he said to the woman, "Has God indeed said, ‘You shall not eat of every tree of the garden’?" (Genesis 3:1, emphasis mine)

So the Lord God said to the serpent: “Because you have done this, you are cursed more than all cattle, and more than every beast of the field; On your belly you shall go, and you shall eat dust all the days of your life.” (Genesis 3:14, emphasis mine)

If the Bible compares the serpent with beasts of the field, then it may well have been one. For the most part, beasts of the field are simply that: beasts found in the field. However, we must leave open the possibility that some of the beasts of the field could have climbed trees. After all, we cannot be sure of all the animals that fall into this category. So, this alone doesn’t necessarily rule out the serpent being in the tree when it deceived Eve.

If we look closer at the initial stages of the deception by the serpent, we find:

Pay close attention to what the Woman said here. She refers to the tree in the midst of the garden. Why would she say it like this if she were referring to a tree that the serpent is sitting in? If the serpent were really in the tree, then it makes more sense that she would respond something like:

Of course, the Scriptures do not reveal the exact location of their discussion, but instead point to a tree elsewhere in the midst of the Garden—perhaps not too far off.

Now, this may be a strong argument against the serpent being in the tree; however, we still cannot completely rule out the possibility. If some insist that the serpent had to be in the tree, then they can certainly put forward an argument. On the other hand, most images of the serpent tempting the Woman from the tree are likely for dramatic impact. It’s just good to keep what Scripture teaches in mind.

Previous Article Were Angels Created in the Image of God? Next Article Was There Pain Before the Fall?