Wind, Not Water, May Have Built the Martian Mount Sharp

by Dr. Elizabeth Mitchell on May 11, 2013
Share:
Email Using:
Gmail Yahoo! Outlook Other

A new analysis of photos of Mount Sharp taken from Curiosity’s vantage point suggests that water was not involved in the origin of the bulk of Mount Sharp.

“Time to see where our Curiosity will take us!” rang out from the ecstatic group at NASA’s Jet Propulsion Laboratory as soon as the Mars rover safely landed on the Red planet last August. Now it appears the answer will include a trip up a mountain formed not by water but by wind. Researchers still expect the mountain to provide a “book” of the planet’s history, including a possible answer about whether life once existed on this planet. But the tale of the mountain will not be told by water-borne sediment.

The Martian rover landed in the 96-mile-wide Gale Crater, which contains Mount Sharp. Views from the Mars Reconnaissance Orbiter (MRO) were used in selecting a landing site where it appeared the lowermost portion of the mountain had been deposited by water. This suggests that at some time in the past Mars may have been host to liquid water.

Orbital photos of the upper portions of Mount Sharp, however, did not suggest a watery origin. Nevertheless, most scientists thought that the 3.4-mile-high mountain had been originally formed by layers of water-borne sediment and then, along with the surrounding crater, carved out by erosion. Scientists have therefore expected eventual analysis of the sediment layers in Mount Sharp would represent a timeline of Martian history.

A new analysis of photos of Mount Sharp taken from Curiosity’s vantage point, published in the journal Geology this month (volume 41, pages 543–546), suggests that water was not involved in the origin of the bulk of Mount Sharp. Researchers also used data from the orbital observations and ground-based measurements to model possible wind patterns and to suggest an alternate origin for the mountain. 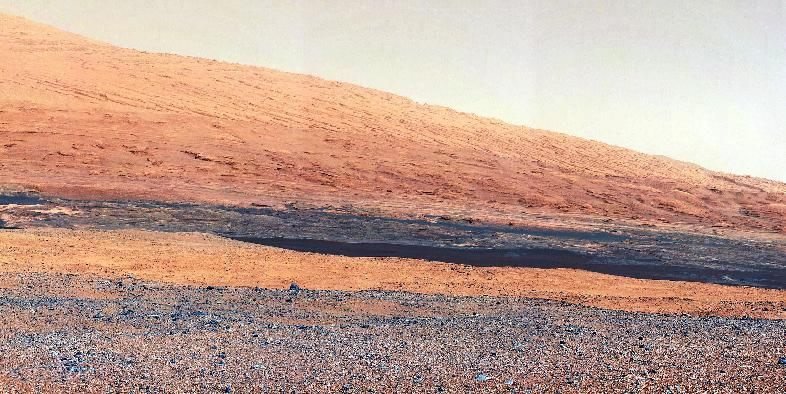 Mount Sharp, which is 3.4 miles high, is in the center of the 96-mile-wide Gale Crater. This model integrates data from Curiosity’s environmental monitors and several orbital views to predict wind patterns thought to exist in Gale Crater, though they await confirmation. Wind seems to sweep up the crater rim (red arrows) and mountain’s sides (yellow arrows) at midday after the ground warms. The winds are thought to sweep around the rim at the blue arrows, though from Curiosity’s current location, in a depression about 6 miles from Mount Sharp, marked by an X, scientists cannot be certain. The wind patterns are thought to reverse at night as the ground cools. Because it now appears Mount Sharp was not built by water, researchers propose wind could have carried the debris to form it. Image by NASA, yahoo.com.

Photos taken by Curiosity’s MastCam reveal an “unconformity” in Mount Sharp's composition, suggesting a place "where the process of sedimentation stopped." (Unconformities signify an erosional or a temporal break.) The researchers therefore suggest that, while the lower layers of sediment may have been deposited by water, the part of the mountain above the unconformity may have been deposited differently. The leading candidate suggested for an alternate mechanism is wind. Though the current study suggests ways in which wind patterns could have dumped debris to build the mountain, further research is needed to see if the sediment composing the mountain’s upper layers are consistent with that ordinarily associated with wind-borne material.

“Our work doesn't preclude the existence of lakes in Gale Crater, but suggests that the bulk of the material in Mount Sharp was deposited largely by the wind,” says study co-author Kevin Lewis.

Researchers suggests that wind sweeping up and down the crater slopes dumped loads of sediment that piled up to form Mount Sharp. “Every day and night you have these strong winds that flow up and down the steep topographic slopes. It turns out that a mound like this would be a natural thing to form in a crater like Gale,” says Lewis. “Contrary to our expectations, Mount Sharp could have essentially formed as a free-standing pile of sediment that never filled the crater.”

Once Curiosity completes its six-mile trip to the mountain and begins sampling the materials that comprise it, researchers hope analysis of those sediments will confirm their hypothesis. “One way or another, we're going to get an incredible history book of all the events going on while that sediment was being deposited,” Lewis says. “I think Mount Sharp will still provide an incredible story to read. It just might not have been a lake.” 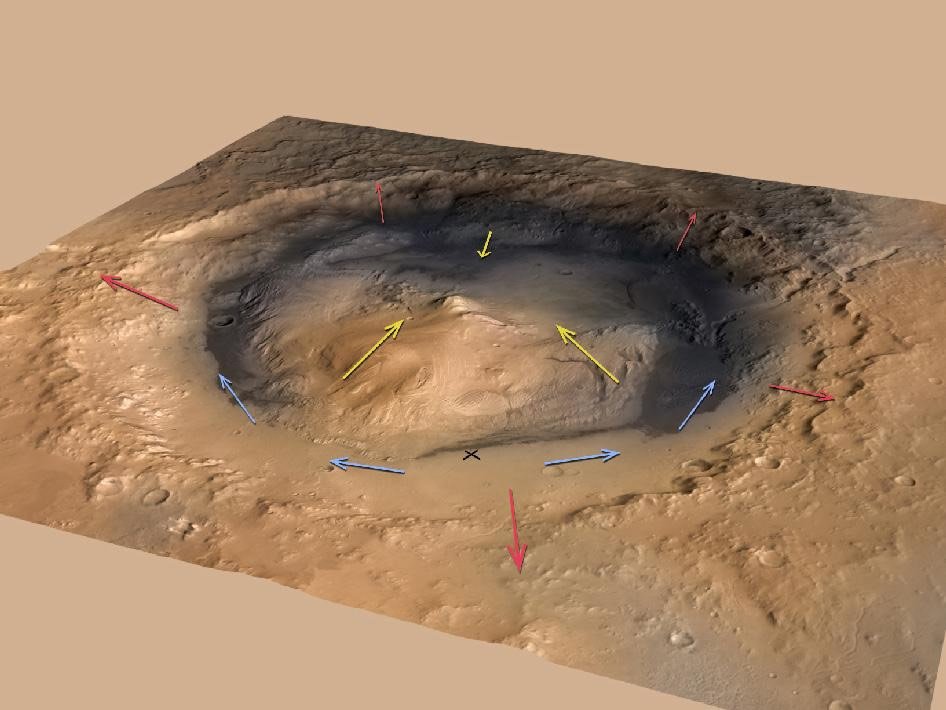 This is a view of Mount Sharp as seen from the Curiosity Martian rover’s vantage point. The lowermost layers appear to be have been deposited by water, scientists still believe. But the latest analysis of the rover’s photos reveal that the bulk of the mountain was probably not formed from material carried by water. Image by NASA/JPL-Caltech/ESA/DLR/FU Berlin/MSSS, via Nasa.gov.

While the composition of Mount Sharp may ultimately provide a peek into conditions existing in the Martian past, calibrating that timeline will be a worldview-based proposition. In other words, what scientists already believe about the age of the planet and the way they think the solar system formed will color their interpretation of how long it took the material comprising Mount Sharp to get there.

Curiosity’s main mission is to search for evidence that microbial life forms may have existed on Mars. Analysis of the first tablespoon-sized sample drilled from 2.5 inches beneath the surface has revealed an assortment of chemicals that researchers believe could have supported microbial life. To date, however, no complex organic molecules or other evidence of life, past or present, has been found on Mars.

Evolutionary scientists tend to believe that given the right chemicals and habitable conditions, along with liquid water, life can evolve. And though it now appears that the massive Mount Sharp was not built by water, there is still evidence that liquid water may have once been present at its base. The presence of water, however, though essential for life, could not have led to the evolution of life through natural processes on Mars any more than on Earth.

Even if evidence that microbial life ever existed on Mars is someday found, that will not demonstrate that life actually evolved there.

Even if evidence that microbial life ever existed on Mars is someday found, that will not demonstrate that life actually evolved there. Such a finding would simply be evidence that life is (or once was) there, not proof of that life’s origins. The Bible does not say whether God created life on other planets, but the Bible does tell us God created all life on earth during the first six days of Creation week, the same week in which He created the rest of the universe, about 6,000 years ago. Discovery of evidence that a “habitable” environment containing liquid water once existed on Mars or even life itself would neither disprove nor undermine biblical truth.