Water Found Near the Edge of the (Observable) Universe

Astronomers have detected water ~13 billion light-years away, which may be confirmation of biblical cosmology recorded in Genesis.

On November 3, 2021, a team of astronomers announced the detection of water (H2O) in SPT0311-58, which is an estimated 12.88 billion light-years from earth. This is the greatest distance that water has been detected. Within the standard cosmology, light from this distance was emitted less than a billion years after the big bang. Hence, we presumably see SPT0311-58 as it was less than a billion years after the beginning of the universe. Therefore, astronomers who are committed to naturalistic origins are very interested in such things.

What is SPT0311-58? SPT0311-58 is a pair of galaxies that is gravitationally lensed by a massive object lying between it and the earth. This gravitational lensing increases the amount of radiation coming from SPT0311-58, without which it is doubtful these observations could have been made. Where did the name of SPT0311-58 come from? The letters refer to the telescope used to discover SPT0311-58, the South Polar Telescope (SPT), a 10-meter microwave, millimeter-wave, and submillimeter-wave telescope at the Amundsen-Scott South Pole Station that went into operation in 2007. The numbers refer to the position of SPT0311-58 in the sky. Astronomers use a spherical coordinate system like latitude and longitude on earth. Declination is how far north or south of the celestial equator an object is, while right ascension is how far east an object is from the “prime meridian” of right ascension passing through the vernal equinox. While declination is measured in degrees, minutes, and seconds of arc, right ascension is measured in hours, minutes, and seconds of time (one hour = 360°/24 = 15°). So, SPT0311-58 is located at right ascension = 03:11, and declination = -58° (the negative sign means it is south of the celestial equator).

The current study of SPT0311-58 used the much more sensitive Atacama Large Millimeter Array (ALMA). ALMA is an array of 66 radio telescopes at 16,000 feet elevation in the Atacama Desert in northern Chile. The high elevation in the world’s driest desert was selected to avoid water vapor in earth’s atmosphere that interferes with observations in the millimeter and submillimeter wavelengths (the SPT’s site at the South Pole was chosen for the same reason). The signals from the 66 dishes of ALMA’s array can be combined to provide high-resolution images of objects. Like the terrestrial water vapor that can hinder astronomical observations from these telescopes, the water detected in SPT0311-58 is gaseous. In addition to H2O, the study reported measurement of carbon monoxide (CO) in SPT0311-58. This study also found evidence of abundant dust.

Like the terrestrial water vapor that can hinder astronomical observations from these telescopes, the water detected in SPT0311-58 is gaseous.

To distinguish between the two galaxies comprising SPT0311-58, one galaxy is called SPT0311-58 West while the other galaxy is called SPT0311-58 East. The two galaxies are separated by 1.5 arcseconds, which, at the distance of SPT0311-58, corresponds to 26,000 light-years. There is almost certainly a component of distance in our line of sight, so the physical separation of the two galaxies probably is greater than 26,000 light-years. The two galaxies likely are merging. Astronomers usually explain the extraordinary brightness of galaxies at such great distance as being due to intense star formation, with many newly formed stars being massive and bright. Massive stars have short lifetimes compared to other stars and so are expected to quickly (over millions of years) fade. Astronomers call these starburst galaxies. Starburst galaxies are thought to have been common in the early universe but are relatively rare today.

What Does It Mean?

This is a record for water detection at great distance. But records are made to be broken, so detection of water at an even greater distance is probably forthcoming. Part of the reason this discovery has gained press attention is that water is believed to be essential for life. Therefore, in the minds of some people, the discovery of water elsewhere in the universe, but particularly at the edge of the observable universe, is evidence of the commonality of life in the universe. Lost in this sort of reporting is the fact that discovery of H2O in the universe is not new. Water is probably the second most abundant compound in the universe, (CO is more abundant), so it is no surprise that water is all over the place. For decades astronomers have found water across the universe. However, wherever water is directly detected in the universe, it is always in the gaseous or solid state. We have not directly detected liquid H2O anywhere but on earth. Liquid water is what is essential for life, not H2O in the gaseous or solid forms.

This is a record for water detection at great distance. But records are made to be broken, so detection of water at an even greater distance is probably forthcoming.

The very detection of H2O and CO at great distance in the universe is problematic for evolutionary astronomy. According to the big bang model, the universe began with only hydrogen and helium, with just a tiny bit of lithium. That is, originally there was no oxygen to make water, nor was there carbon to make CO, the most abundant compound in the universe. What about the dust detected in SPT0311-58? Cosmic dust is made of elements heavier than hydrogen and helium too. Where did all these other, heavier elements come from? Supposedly these elements were forged in nuclear reactions inside stars that provide to stars their power. After the first stars formed, they synthesized the heavier elements, and then the products of this nucleosynthesis were spewed back into space when the first stars erupted in supernova explosions. Once these heavier elements mixed with the hydrogen and helium already present in space, new generations of stars formed and repeated the process. It was the gradual accumulation of chemical enrichment that eventually led to enough heavier elements to produce compounds and dust. The question is, could less than a billion years have been enough time for stars and galaxies to form and chemical enrichment to have progressed to the point of explaining what we see in SPT0311-58? It may be that SPT0311-58 has as much chemical enrichment as we see in the local and supposedly much older universe today. If so, then this evolutionary history of elemental abundances in the universe could be in trouble.

Waters Above the Expanse?

Water at the edge of the universe may sound reminiscent of biblical cosmology. According to the day two account of creation (Genesis 1:6–8), God made an expanse in the midst of the waters of the early earth to separate the waters below from the waters above.

Water at the edge of the universe may sound reminiscent of biblical cosmology. According to the day two account of creation (Genesis 1:6–8), God made an expanse in the midst of the waters of the early earth to separate the waters below from the waters above. The day four account (Genesis 1:14–19) reveals that God placed the heavenly bodies in this expanse. This suggests that the universe has an edge and that water is at that edge (see also Psalms 148:4). Neither of these two ideas are welcome in modern cosmology. It is not likely that the water detected in SPT0311-58 is this water above the expanse. Rather, that water is yet beyond SPT0311-58. The cosmic microwave background (CMB) may be radiation from the waters above.

Water appears to be the primordial stuff of creation. Water is mentioned twice in Genesis 1:2 (“the deep” and “the waters”) at the beginning of creation. 2 Peter 3:5 expands upon this. Since God formed the expanse (what we might call the atmosphere and space today) within the primordial waters, some of which was lifted off the originally created earth, then we might expect that God formed the heavenly bodies (including SPT0311-58) out of water. Hence it is no surprise that there still is water across the universe. 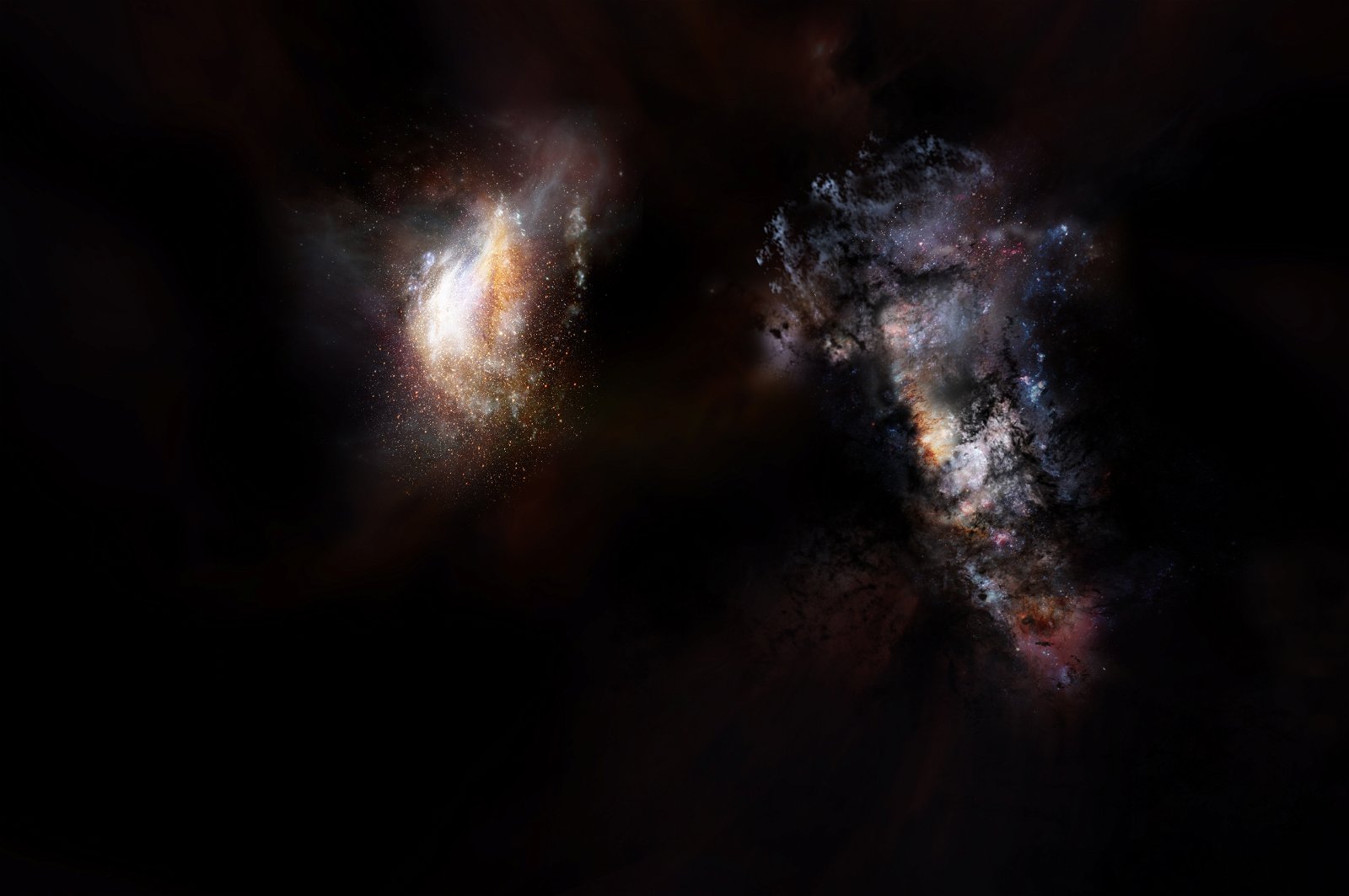 An artist’s conception of what SPT0311-58 may look like. It is easy to think that this is an actual color photograph in visible light, but it is not. Optically SPT0311-58 is very faint and shows little structure. The telescopes used to observe SPT0311-58 operate in the microwave, millimeter-wave, and submillimeter-wave parts of the spectrum. Compare this image to Figure 2. Image Credit: NRAO/AUI/NSF; D. Berry 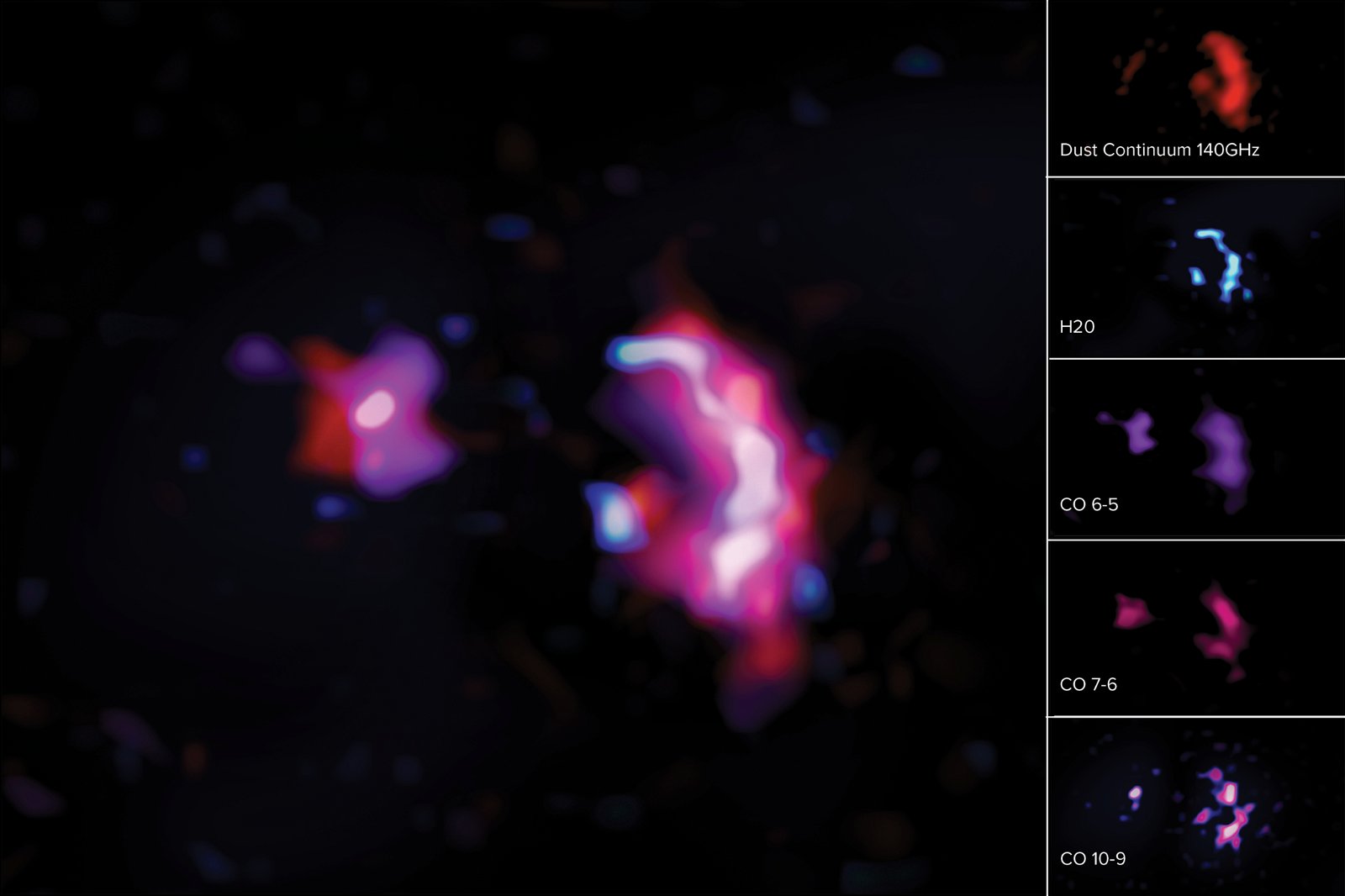 Composite image of SPT0311-58 combined from the five emission sources shown on the right. Note that since these images are made from radiation not visible to the human eye, these are false-color images. That is, the images properly reveal structure but not appearance. Image Credit: ALMA (ESO/NAOJ/NRAO)/S. Dagnello (NRAO)