A weekly feature examining news from the biblical viewpoint

A Martian snow cone, diamonds are forever, going for a titanic swim, and more!

NASA’s Phoenix lander has identified water in a soil sample collected from Mars—no small source of excitement for those who proclaim “where there’s water, there’s life.”

Not so fast! The much-publicized soft tissue found inside a T. rex thigh bone (supposedly millions of years old) may not be dinosaur protein after all, if the research of a University of Washington scientist is correct.

3. Diamonds Are the Latest Evidence For Evolution

To see the newest evidence for evolution—and what Darwinists rest their faith on—look no further than the local jewelry shop!

To the sunny beaches on Titan, everyone—let’s all go for a swim!

No wonder houseflies can be so difficult to target: their guidance-control systems are sophisticated enough that they may inspire improvements to control systems in autonomous air vehicles.

Strapping fish on soldiers may not be the most practical self-defense measure, but future fighting men and women could nonetheless find themselves protected by fish-inspired armor.

Engineers report in this week’s issue of Nature Materials on the super-strong armor of an African fish, Polypterus senegalus. According to the research, the fish’s armor is so effective because it is a composite of four materials layered and aligned in a specific manner. “The different chemical properties of each material, the shape and thickness of each layer and the junctions between layers all contributed to the armor’s strength,” explains LiveScience’s Jeanna Bryner.

Commenting on the news, Field Museum assistant curator of zoology Leo Smith said, “That doesn’t surprise me that millions of years or hundreds of millions of years of evolution would be a good starting point for what we need for this day and age.” Comments like Smith’s seem to be the unjustified, perpetual cry of Darwinian scientists when they encounter incredible designs—and they add no value to the research, either. Creationists, however, can remember that God took far less than “millions or hundreds of millions of years” to fashion these designs!

Authorities nearly a hundred miles north of our Creation Museum were assisted by the dutiful efforts of part of AiG’s security team earlier this week when an 11-year-old boy with autism disappeared from his home. 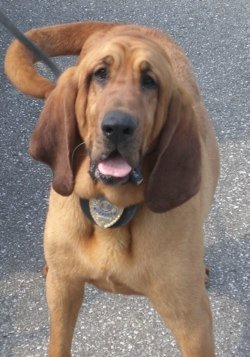 AiG bloodhound Izzy, the hero of the week.

Responding to the call was Answers in Genesis K-9 supervisor David Blaylock, along with AiG’s Security Department bloodhound Isabelle (“Izzy”).

Authorities had been worried the boy would become lost or injured in the thick woods, and a state patrol helicopter and plane dispatched to search for him had been unsuccessful, even when using infrared cameras.

Next, about seven K-9 teams were called in, including David and Izzy. After just under a half hour—and just after the sun set—David and Izzy found the boy near a creek not far from the child’s home.

AiG is thankful to have a top-notch security team with several talented dogs and their handlers. We are certainly thankful they were of use to the general public this past week. Our security team stands ready to support local law enforcement and emergency services whenever necessary.