If you live in the jungle and have an itch, where do you go to get relief if the local clinic won’t let you in? Not a problem for monkeys and many others of God’s creatures. They can find their own herbal remedies … without a doctor’s help!

Holly Dublin’s observations took a sharply unexpected turn. For more than a year, the World Wildlife Fund researcher had tracked the movements of a pregnant African elephant. During that time, the animal lived a fairly predictable life: a few miles’ journey with the herd each day to graze on the usual 500 pounds (227 kg) of leaves and herbs.

But then, around the end of her pregnancy, the animal broke the routine and trekked 17 miles (27 km) across East Africa in a single day. Much to Dublin’s surprise, the elephant suddenly had a taste for a tree in the Boraginaceae family—so much so, in fact, that the elephant ate all of it … leaves, trunk, everything.1

So, why would an elephant with plenty of food available make a long journey to track down a particular tree? The answer reveals something amazing about God’s care for His creation—and us—even in a world that’s groaning because of sin.

Most of us humans are well armed when it comes to dealing with minor sicknesses. Our closets and cabinets overflow with pain relievers, fever fighters, cough quellers, and stomach soothers. We reach in, swallow the right pill, and expect relief soon.

For animals in the wild, the medicine cabinet seems at first glance to be pretty bare, and you might think they’re just left out in the cold when it comes to finding remedies. But even with the fallen nature of our world, the Creator hasn’t left untamed creatures, like the ravens that neither sow nor reap (Luke 12:24), defenseless against all the things that ail them. In fact, He’s stocked their “closets” with a cornucopia of cures. 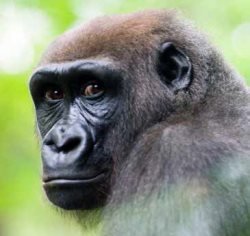 Most African apes, including gorillas, swallow bristly leaves whole to get rid of parasites in their stomachs and intestines.2

Of course, you’d be excused for thinking these treatments look a whole lot like your run-of-the-mill sticks, insects, leaves, and dirt. But to animals living in nature, these everyday wonders are just as useful as that well-stocked medicine cabinet.

For most African apes, parasites are just a way of life. During the rainy season especially, parasitic larvae commonly infect the digestive tracts of chimps, bonobos, and gorillas. The troubled apes, however, have a unique method of dealing with these unwanted gastrointestinal guests. Even with much tastier treats around, the apes will swipe bristly leaves from plants such as Aspilia in the sunflower family, carefully fold them up, and swallow them without chewing.3

While these leaves offer no nutritional value and usually aren’t a part of the ape’s diet, the Aspilia-eating isn’t just for fun. Instead, these fuzzy leaves act much like Velcro in the apes’ stomachs and intestines. Parasites get trapped by the bristles and folds of the leaves and are swept out. Chemicals in the plant may also keep the parasites from overstaying their welcome.

Monarch butterflies seem to know a useful plant when they see one. When a mother has been infected by a tiny parasite that pokes holes in her skin, she carefully flits around to taste various milkweed plants. Her fussy behavior doesn’t mean she’s a picky eater. The evidence indicates that she’s looking for the tropical milkweed to lay her eggs on. When her baby caterpillars munch on the tropical milkweed instead of the more common swamp milkweed, the extra doses of plant steroids keep the parasites at bay for the next generation.4 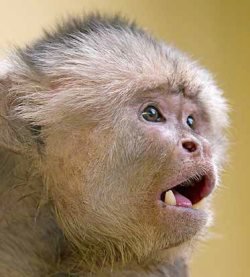 Capuchin monkeys smash and rub millipedes on their fur to prevent mosquito bites.5

The pesky fruit fly has a similar weapon in its arsenal when fighting off parasitic wasps, which lay their eggs in the flies. To deal with the infestation, the fruit flies eat foods rich in alcohol. While the alcohol doesn’t impact the flies, it often prevents the wasps from developing.6

Parasites also come knocking where animals live, but God provided a number of resources for animals to protect themselves. For example, the duskyfooted woodrat builds its nests from piles of sticks, which may reach several feet in height and width. To make their hovels cozier, the animals construct several chambers connected by tunnels. Researchers at Vassar College in New York discovered that the rats scatter bay plant leaves around their moss-covered sleeping chambers, even tearing the leaves to release the strong aroma. These bay leaves appear to inhibit the growth of flea larvae, a common nuisance for the furry creatures.7 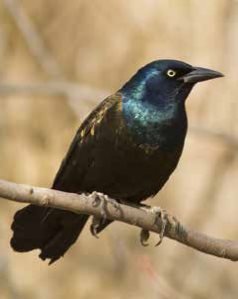 Common grackles allow ants to crawl on their outstretched wings to keep pests away.8

Birds, too, know a bit about protecting their homes. While the nests themselves are a study in masterful architecture, what goes into those nests can be just as fascinating. Many avian species select plant materials that reduce pests and hinder the growth of bacteria. For instance, starlings weave into their nests a few leaves from wild carrots to repel mites.9

Pests never rest, at least that’s how it seems when gnats and biting flies swoop in. While many large creatures have tails to swish the bugs away, other animals have rubbed up against another God-given solution.

In the tropical forests of Venezuela, swarms of mosquitoes descend on whatever animals happen to be close by—except for some clever capuchin monkeys. Instead of bug repellant, these simians use something a bit more … well … natural. The monkeys poke around in termite mounds or tree bark until they find a certain millipede (Orthoporus dorsovittatus) and then smash the specimen into their fur from head to feet. Powerful chemicals in the millipede drive the mosquitoes to look elsewhere for a meal.10 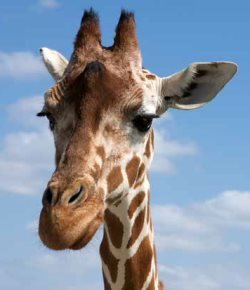 Giraffes eat mouthfuls of dirt from termite mounds to soothe their stomachs.11

The common grackle also knows a thing or two about rubbing in relief. Like many other birds, the grackle bows to the ground with its wings outstretched to let ants crawl on (called “anting”), or it sometimes rubs them over its feathers using its beak. The ants secrete formic acid that helps keep pests away. But if it can’t find ants, the bird has been known to “wrestle” with marigold blossoms, take a dip in walnut juice, or splash on some lemon or lime to do the same thing.12

The pharmacy God provided is a bit more down-to-earth for some animals—really down-to-earth. Leaf-eating giraffes, for instance, have been known to scoop up a mouthful of dirt from termite mounds and swallow it down. Scientists call this behavior geophagy, which comes from two Greek root words that essentially mean “eating dirt.”

The giraffes aren’t just playing with mud pies, though. The clay in the termite mound contains elements that coat the animals’ stomachs and give them relief. (It’s not too different from you gulping down some antacids to soothe a bellyache.) Those compounds may also neutralize plant and bacterial toxins in the giraffe’s diet.13 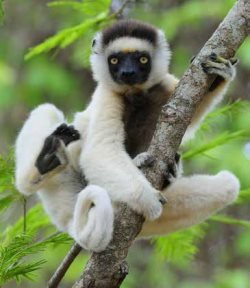 Dirt connoisseurs come in smaller sizes, too. One researcher observed several bird species in New Guinea flocking to dirt exposed by a landslide. In a land covered with trees and grass, the rare exposed clay proved irresistible.15 But why would animals eat dirt? Well, dirt may in some cases contain minerals essential for health, or provide grit for gizzards (a digestive organ) to aid in grinding up food.16 In this case, the dirt provided chemicals that detoxify poisons in plants.

For some motherly animals, the expectation of new life is a vital time to hunt for remedies. Pregnant sifaka lemurs sometimes munch the bark of fig and tamarind trees before giving birth. Compounds in the bark help encourage milk production and also get rid of nasty gut parasites (now that’s a combo meal).17 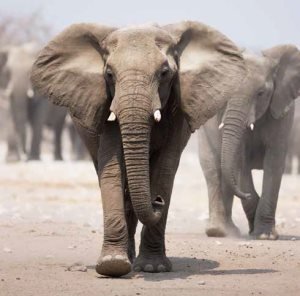 Pregnant elephants will eat a type of tree that helps induce labor.18

This type of behavior also helps explain the unusual craving that drove a pregnant elephant to tromp 17 miles to wolf down a special kind of tree. As the local researcher continued rustling through the leaves for an answer, she found that Kenyan women in the area have long used tea from the same tree to induce labor. The elephant, which gobbled up the whole thing, apparently preferred a quicker method.19

According to Jesus, studying how God takes care of the animals can tell us quite a bit about how He cares for us (Luke 12:24). They don’t hit the supermarket, worry about where they’ll eat, or stock medicine cabinets full of pills. Instead, the Lord faithfully supplies their needs—even in a sin-cursed world. They suffer from parasites, diseases, and infections, but they find remedies right at hand. (The solutions may not always be so palatable for us, but we can’t argue with the results.)

That doesn’t mean we should necessarily empty our medicine cabinets and start scrounging for more natural cures, covering our skin with smooshed millipedes, or sampling dirt. Rather, the example from creation is much more powerful when we see the bigger picture: If God provides so well for the animals, you can be sure He knows how to handle the problems in our lives as well.