During the Christmas season and into the New Year, Ark Encounter guests can experience the wonder of a spectacular new event called “ChristmasTime at the Ark.” From December 8 to January 15, three times each evening (except Christmas Eve and Christmas Day), Ark visitors will watch a high-tech animated laser-projection show, Encounter the Wonder, that uses 15 video projectors, with the side of the massive Ark as a long screen. The Ark will become a 510-foot-long, five story-high screen for this high-tech, dramatic laser-video projection show, with a state-of-the-art sound system to accompany the striking animation.

Technicians are putting the final touches on employing cutting-edge “3D mapping” to animate the Ark, the entry ramp, “The Door,” and even the interior of the Ark for this laser projection show. The Scripture-based presentation begins in Genesis, continues to Noah’s Flood, proceeds to Christ’s birth, and concludes with the message of the Cross. 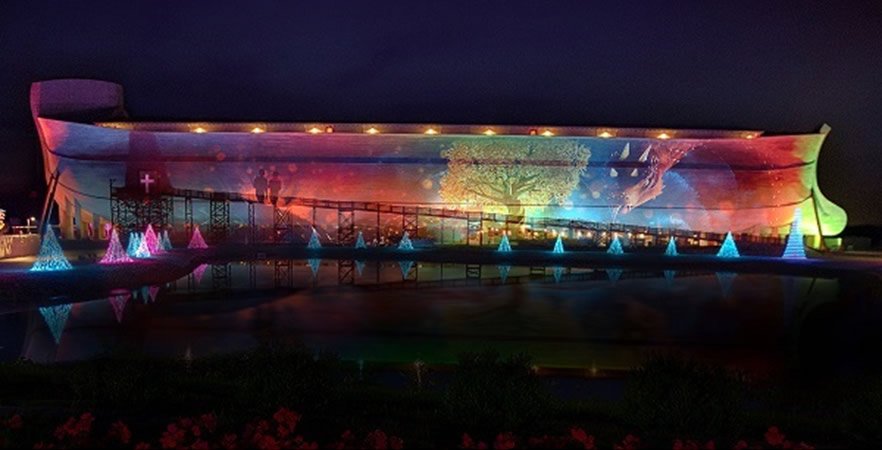 Fifteen high-power projectors will display stunning 3D-like images on the side of the 510-foot-long Ark.

Ken Ham, CEO of Answers in Genesis (AiG) and visionary behind the Ark and the new Encounter the Wonder laser-video show, declared,

I’ve been following the progress of the production of this world-class show, and it’s going to be amazing! I expect people to come not only from around America, but even overseas. It’s going to be magnificent.

Encounter the Wonder will be shown three times every evening from December 8 to January 15 at 7 p.m., 8 p.m., and 9 p.m. (except Christmas Eve and Christmas). The ten-minute animation show will depict animals walking up the Ark ramp, the floodwaters rising, a cutaway of the Ark’s three decks so guests can peer inside, and other striking images.

The grounds of the Ark Encounter are already open to the public for shopping and dining at no charge (except for the cost of parking) and will continue through February 28, 2018. Guests will be able to observe up close the outside of the impressive 510-foot-long Ark, shop inside its large gift store offering extensive Fair-Trade items and browse other artisan stores, grab a meal at Emzara’s buffet restaurant just a few steps from the Ark, and stroll through the ever-expanding Ararat Ridge Zoo and petting zoo area to view the exotic animals.

As visitors enjoy the Ark Encounter grounds and zoo for free (parking $10 per car) from November through February, they can purchase tickets at the usual price to go inside the Ark and experience the three massive decks of exceptional exhibits. Children, teens, and adults can also buy tickets for a camel ride and soar on the thrilling zip lines. The Ark Encounter is closed Thanksgiving Day, Christmas Eve, and Christmas.

Each evening, as the Ark is lit up in rainbow lights, guests can purchase a Christmas buffet at a reasonable cost, meet adorable zoo animals, listen to live music, shop for one-of-a-kind gifts, including dozens of Fair Trade items, and much more. The gift shops have one of the largest inventory of FairTrade items in the US, displaying unique, hand-made gift items that help support underprivileged people around the world.

With huge crowds throughout the year of sometimes 8,000 a day visiting, Ark attendance continues to be strong outside the summer vacation months. One day alone in late October, there were 48 tour buses which brought nearly 2,000 guests to tour the Ark Encounter, with thousands of others in attendance.

The Ark Encounter, owned and operated by AiG, is located in Williamstown, Kentucky. (south of Cincinnati) at exit 154 off I-75.

Meanwhile, the Ark’s sister attraction, the Creation Museum in Petersburg, Kentucky, 45 minutes away, is gearing up for its own special Christmas activities and is expanding this year. Because of the potentially large crowds coming to the Ark Encounter in December and recognizing that many of the Ark guests will visit the Creation Museum as well, AiG has expanded ChristmasTown to include seven more evenings. 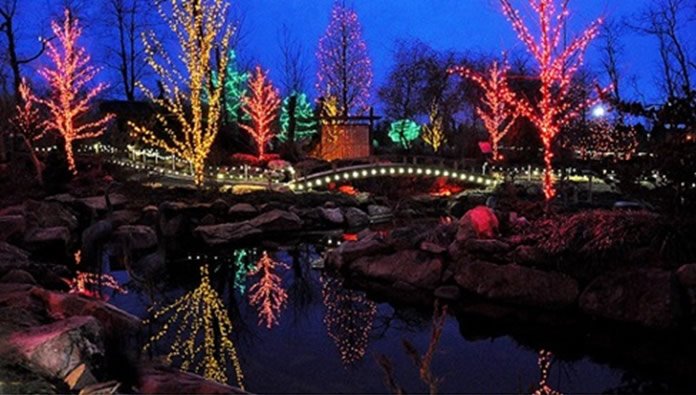 This year the ChristmasTown program will run December 8–30 from 5 to 8 p.m. (closed Christmas Eve and Christmas Day). The museum grounds will be decked with beautiful light displays (tens of thousands of bright lights) to decorate the scenic Creation Museum gardens. Returning features include a Live Nativity, an outdoor drama highlighting the biblical account of the Magi, other biblical characters spread throughout the gardens, several evening concerts, and an expanded marketplace. After 5 p.m., the museum will be open for only $15 so guests can also walk through the museum and see its stunning exhibits. ChristmasTown attracts up to 7,000 people an evening from all over the United States.

(Both attractions are closed Thanksgiving, Christmas Eve, and Christmas Day.)

More about the events at the Ark Encounter occurring through February, including “ChristmasTime at the Ark,” can be found at ArkEncounter.com. For the Creation Museum’s ChristmasTown events in December, see CreationMuseum.org.

Answers in Genesis (AiG) is an apologetics (i.e., Bible-defending) ministry based in northern Kentucky, near Cincinnati. AiG opened the Ark Encounter, a one-of-a-kind Christian themed attraction in 2016 with a massive Noah’s Ark in Williamstown, Kentucky, which sometimes draws 8,000 guests in a day. Built according to the biblical dimensions in Genesis chapter 6, the Ark is 510 feet in length, making it the largest freestanding, timber-frame structure in the world. The Creation Museum, located west of the Cincinnati Airport, has welcomed well over three million visitors and has proved to be a major family attraction in the Midwest.